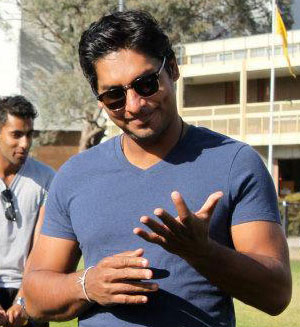 Kumar Sangakkara is recovering well after surgery to his left index finger to mend a compound fracture he suffered after taking a blow from Australian quick Mitchell Johnson in the Boxing Day Test at the MCG last month.

Sangakkara said today that his injury is healing rapidly enough to return to competitive cricket in February.

"The good news on my finger is that it is healing fast and I am regaining movement every day," Sangakkara announced on his official Facebook page.

"[I] will aim to be in the nets by the end of this month and hopefully play for NCC in mid-Feb to get ready for next series."

The injury ruled the 35-year-old out of Sri Lanka’s ongoing tour of Australia, which in all likelihood was his last Test tour Down Under.

His injury was one of several to be suffered by Sri Lankan players during their injury-plagued tour of Australia. Chanaka Welegedara, Prasanna Jayawardene, Shaminda Eranga, Nuwan Kulasekara and Dinesh Chandimal have all picked up injuries on tour.