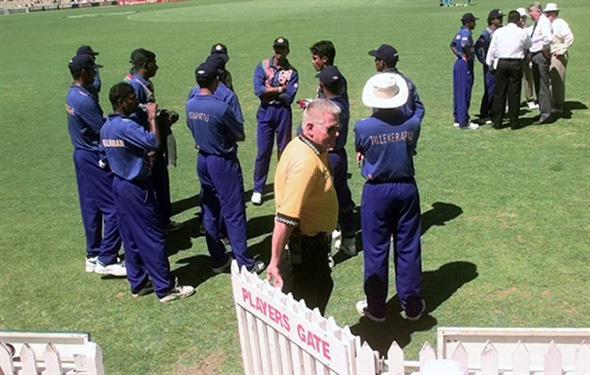 AUSTRALIA, Adelaide : The Sri Lankan team (L) waits on the field as Sri Lankan captain Arjuna Ranatunga (background-R) tries to resolve matters after bowler Muttiah Muralitharan was called for chucking by umpire Ross Emerson at their game against England at the Adelaide Oval on 23 January 1999. The decision resulted in the Sri Lankan team walking off until the matter was finally resolved. AFP-PA Photo/Ben Curtis.

Ross Emerson, the Australian umpire who no-balled Muttiah Muralitharan for throwing, has admitted that his decision to call the bowler was not entirely his own.

Emerson told the The Daily Telegraph in Australia that he no-balled Muralitharan due to orders from an unnamed Cricket Australia official.

“I was called to a meeting with him [Cricket Australia official] and, knowing that I had called some other players, he told me I had set standards in certain areas which I should uphold in Adelaide. Yet everything blew up after I called Murali and when I saw him again he wouldn’t even look at me,” Emerson said, claiming he had been let down after following through with the orders.

Prior to the tour, Muralitharan’s bowling action had already been subjected to testing at the Hong Kong University of Science and Technology where scientific scrutiny proved that Muralitharan’s elbow could not straighten due to a congenital deformity. What appeared to be a throw was in fact an optical illusion.

The testing in Hong Kong and the subsequent green light by the game’s governing body in 1996 allowed Muralitharan to continue playing.

Armed with orders from the top, Emerson no-balled Muralitharan again in front of nearly 10,000 spectators when Sri Lanka played England in the ninth match of the Carlton & United Series at the Adelaide Oval on January 23, 1999.

It was later revealed that Emerson was on sick leave at his regular day job whilst officiating in what was to be his last international match as an umpire.