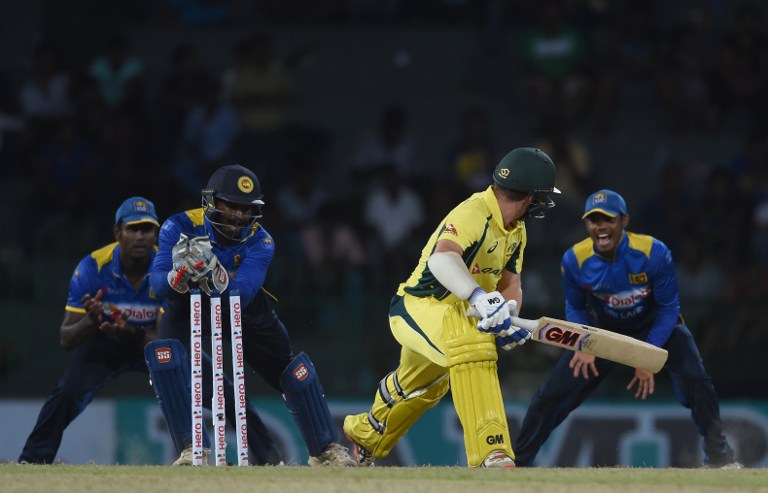 Half-centuries from Aaron Finch and skipper Steve Smith helped Australia pull off a tricky chase to defeat a resilient Sri Lanka by three wickets in the first one-day international in Colombo on Sunday.

Australia, who suffered their first series whitewash against the hosts in the three Tests, chased down 228 in 46.5 overs at the R. Premadasa Stadium to lead the five-match ODI series 1-0.

Pacers James Faulkner and Mitchell Starc, who became the fastest to reach 100 wickets in his 52nd match, also played their part with seven wickets between them after Australia elected to bowl first.

Opener Finch, who scored a quickfire 56, gave Australia a brisk start despite the early wicket of David Warner, who was out for eight after a scratchy 17-ball stay at the crease.

Finch took on the Sri Lankan bowlers with ease in the first 10 overs of the mandatory powerplay as he regularly cleared the infield to notch up seven boundaries and two sixes during his 46-ball knock.

On-field umpire Aleem Dar ruled Finch not out before Sri Lanka successfully reviewed the decision in their favour much to the disappointment of the batsman.

Mathews though could not hold on to a sharp chance at slip, giving Smith a new life at 15 off Dilruwan Perera and the batsman made the most of it.

Another debutant spinner Lakshan Sandakan got his maiden ODI wicket in Matthew Wade, who had worked hard for his 26 which came off 34 deliveries to put Australia in trouble at 128/3.

But Smith, who top-scored with a dogged 58, put together a 62-run partnership with George Bailey (39) to thwart Sri Lanka's spin attack on a sluggish pitch which was taking vicious turn.

Off-spinner Dilruwan, who ended with three wickets, got Smith in the 38th over with Australia needing another 38 to win the match.

The visitors lost three more wickets after that but bowling heroes Starc, on five, and Faulkner, also on five, remained unbeaten as Australia recorded their highest ODI run chase in Sri Lanka.