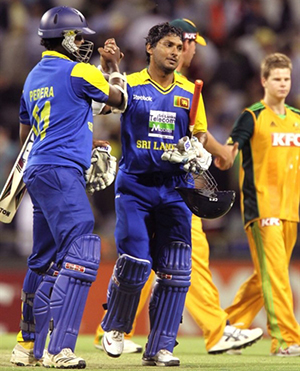 November 01, 2010 (Island Cricket): Although Cricket Australia are doubtful of a large turn out at the Melbourne Cricket Ground (MCG) for Wednesday’s first ODI between Sri Lanka and Australia, the tourists’ thrashing of the once invincible Australia in the Twenty20 International at Perth, yesterday, will see thousands of fans of the island nation’s cricket team flock the venue in hopes of witnessing history in the making.

The series is Muttiah Muralitharan’s final tour to Australia, and Sri Lanka have never had a better chance of winning an ODI series in Australia, which presents their fans with more of a reason to make it out to the MCG on November 03. But, bad weather threatens to get in the way.

The weather has shown improvement over the last several days, but showers are forecasted for Wednesday.

Australia are in the midst of a rare loosing streak. The hosts have not won a match in all three forms of the game since July this year when they won a Test against Pakistan. But Sri Lankan captain, Kumar Sangakkara, remained cautious.

Sangakkara said his team still had a lot to work on, and a lot more to prove.

"We should not be overconfident as Australians will be a different kettle of fish in the one day international series. Nevertheless, we are focused to capitalise on this magnificent win, and make our presence felt in Australia," Sangakkara told reporters last night.

"We were a little bit disappointing with the bat, especially up front losing four wickets early. I think we got outplayed. No doubt conditions were different to what we just faced in India, but look, we’ve had great preparation here, the nets are very similar to what we faced out in the middle so we have no excuses. Sri Lanka bowled really well."

Unlike Sri Lankan teams of the past, Sangakkara’s men handled the pace and bounce in Perth far better than the hosts did.

Looking like a team not from the sub-continent, Sri Lanka’s bowlers hit the right lengths, and later handled the Australian quicks with ease when it was their turn to bat.

The Australians, meanwhile, incorrectly assumed that extra pace and short pitched bowling would undo the visitors. It was not to be.

The lack of variation on offer from Australia’s seamers, coupled with their batsman’s never ending desire to hit the ball into the stands against quality bowling that threw every variation that one could think of at them, proved to be their undoing last night.

But Sri Lanka has rightfully acknowledge that things will be different in the upcoming three match ODI series.

The inclusion of captain Ricky Ponting, Nathan Hauritz, Mike Hussey, Mitchell Johnson and Shaun Marsh will bolster the Australian side, and the hosts remain hopeful that they are able to overcome their recent string of defeats.