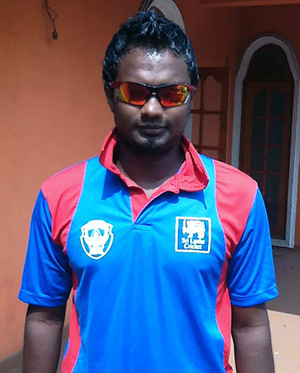 Satisfaction is written all over his face. The slow left-arm spinner Malinda Pushpakumara has just completed a highly successful premier league cricket season. The Moors Sports Club  tweaker bagged 68 wickets in 10 matches — the highest tally for the season.

"Before the start of the season, my target was to be the best bowler. I’m happy I’ve achieved it," said the 26-year-old.

Pushpakumara is leading a pack of three left-arm spinners in the highest wicket-takers chart this season. Behind him are Panadura Cricket Club’s Gayan Sirisoma (58 wickets) and Colombo Cricket Club’s Dinuka Hettiarachchi (58).

Success has not come Pushpakumara’s way unexpectedly though. He was the highest wicket taker last season as well. During that season, playing for Chilaw Marians, he accounted for 56 wickets.

"This time I worked harder, and I was in good rhythm too," Pushpakumara said, and added that his only regret was his failure to finish the job for his team.

Moors lost the final of this year’s premier league tournament to Sinhalese Sports Club by six wickets. Sri Lanka Cricket’s strange decision to play the final at the SSC ground too did not help Pushpakumara’s side. However, Moors can be proud of Pushpakumara’s performances, as he was instrumental in seeing them to the final.

He has registered seven five-wicket hauls and match bags of 10 wickets three times, and Pushpakumara said that he rates his performance in the game against Panadura highly.

"Going into the match, Panadura were ahead of us in the points tally," he recalled. "Therefore, we needed to beat them. The match was a virtual semifinal for us. It was a tough match. I got 11 wickets there."

His first innings figures of 7 for 56 in that match is Pushpakumara’s best in the season.

In addition to his slow left-arm orthodox, Pushpakumara is armed with the top spinner. The delivery does not turn much, but generates good bounce. He also possesses an arm ball, which moves back into the right-handed batsman. There are variations aplenty to bamboozle most batsmen.

There is also another facet to the spinner: Pushpakumara’s is an inspirational story for any young sportsman trying to beat the odds to be successful.

Born to poor parents, he has been exposed to the harsh realities of life in the capital. Not long ago, he used to sleep at a club house after practice and matches. Even today, after six years of club cricket and over 50 first-class matches under his belt, he uses three-wheelers for his transportation. Along with his natural abilities, his tough life experiences have made him a determined character and a strong fighter — two valuable traits on the cricket field.

Pushpakumara represented Lumbini College from under-13 to under-19 level. He also played age group cricket for Sri Lanka and was a member of the Sri Lanka under-15 side that played in the Asia Cup in Sharjah. Playing for Sri Lanka in the ICC Under-19 World Cup of 2006 (at home under Angelo Mathews) was very special for him, he said.

If there is a reward for his good showing with the ball in the just concluded season, Pushpakumara would like it to come in the form of a spot in the Sri Lanka A team on their tour of the West Indies in May-June.

His long-term ambition is to replace the leading left-arm spinner Rangana Herath in the national team.