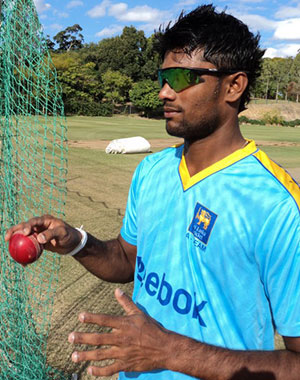 August 14, 2011 (Island Cricket): Sri Lanka A defeated England Lions by 10 wickets in the second one day match to level the three match series 1-1.

England Lions’ captain James Taylor won the toss and elected to bat at New Road. An inspired spell of bowling by Sri Lankan leg-spinner Seekkuge Prasanna reduced the Lions to 27-6.

Prasanna recorded figures of 6-23 from his ten overs which included three wickets in an over, trapping Chris Nash (Sussex) leg before then picking up Ben Stokes with only the second ball the Durham all-rounder faced and Prasanna bowled Jonny Bairstow with his next delivery.

Warwickshire all-rounder Chris Woakes offered some resistance, finishing the innings with an unbeaten 45 when the Lions were dismissed for 108 in the 36th over.

Sri Lanka A’s opening batsmen Malinda Warnapura (61) and captain Dimuth Karunaratne (48) played confidently to chase down the target in the 18th over in a comprehensive victory for the tourists.

"We’re very disappointed to lose like that today, particularly after such a good win on Friday," Woakes said.

"We know we can play a lot better and it’s now a must win game for us at Northampton. I think we’re a talented side so we’ll work on what went wrong today and come back on Tuesday knowing that if we play the sport of cricket we know we’re capable of we can beat Sri Lanka and win the series.”

The final match in the series takes place on Tuesday 16 August at Northampton.