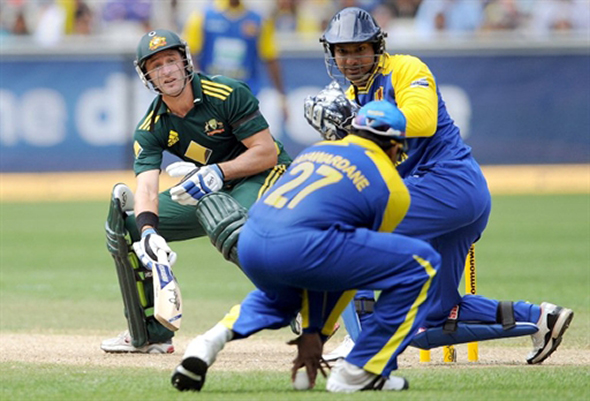 A missed stumping chance by Kumar Sangakkara proved costly for Sri Lanka as Michael Hussey saw Australia to a respectable but below par 239 at the MCG today. AFP PHOTO/William WEST.

November 03, 2010 (Island Cricket): Sri Lanka’s bowlers managed to restrict Australia to 239/8 in 50 overs at the Melbourne Cricket Ground (MCG) today in the first ODI of their three match ODI series.

Winning the toss and batting first, Australia got off to a cautious start with openers Shane Watson and Brad Haddin adding 30 for the first wicket. Watson fell in the seventh over getting a leading edge to a Malinga slower ball

Stand in skipper Michael Clarke and Haddin added 55 runs for the second wicket before Clarke fell to Thisara Perera, edging one behind to Kumar Sangakkara who took a brilliant catch diving to his right.

On the verge of a fine half century, Haddin followed soon after thanks to an uppish square cut, caught spectacularly by Tillakaratne Dilshan at point.

Perera then cleaned up Cameron White in the very next delivery with a magnificent leg cutter that pitched on middle and seamed away to knock back White’s off stump.

Australia were reeling at this point with four top order wickets down for just 88 runs on the board.

A missed stumping chance by Sangakkara off Muttiah Muralitharan proved to be costly for Sri Lanka. Hussey added 67 runs with Shaun Marsh for the fifth wicket, and then continued to build valuable partnerships with the lower order to remain unbeaten on 71.

For Sri Lanka, Thisara Perera picked up his second five wicket haul in his brief career finishing the innings with five wickets for 46 runs in eight overs.