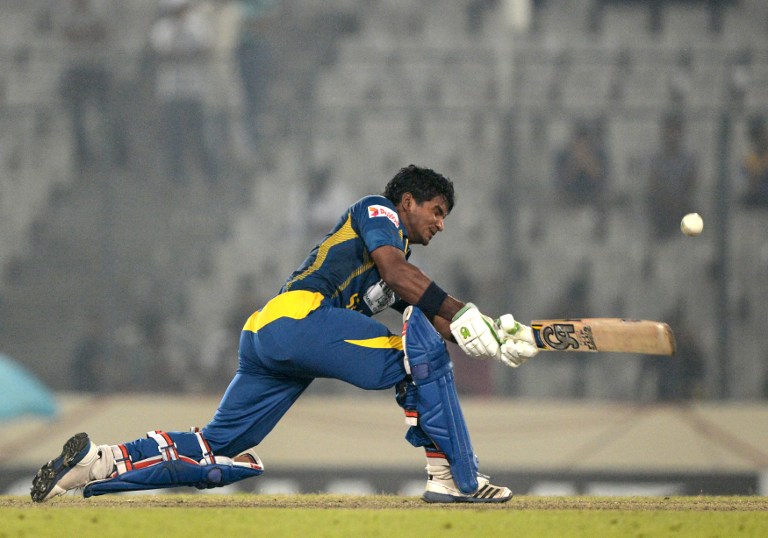 With 311 runs and an average of 155.50, Kusal Perera finished the three-match series as the highest run-getter. © AFP PHOTO

Sri Lanka A were defeated in the third and final one-dayer after Mukhtar Ahmed and Fawad Alam both played crucial innings to guide Pakistan A home in a big second innings chase at the R. Premadasa Stadium in Colombo on Saturday.

Set a total of 278 for victory, the visitors began with an opening stand of 33 before Isrullah fell LBW to Nisala Tharaka for nine. Ahmed was then joined by Khurram Manzoor, who added 75 with him for the second wicket. Left-arm spinner Lakshan Sandakan then had Manzoor leg-before for 31, but Ahmed continued on, striking 11 fours and two sixes on his way to 96.

Ahmed's dismissal at 185/3 brought Ali Waqas to the crease, and he scored a vital anchoring innings of 26 from 37 deliveries in a 54-run partnership for the fourth wicket with Alam. Although Waqas fell to Shehan Jayasuriya for the fourth LBW verdict of the match, Alam was able to see the team home to victory with his unbeaten 76 not out from 88 balls.

Earlier in the day, Pakistan A won the toss and chose to field. Kushal Perera continued his spectacular run of form, scoring 87 from just 68 deliveries with 11 fours and three sixes, in a 118-run opening partnership with Jayasuriya (67 from 92 balls).

After Perera was caught by Ahmed off the bowling of paceman Tabish Khan, Jayasuriya added 54 with allrounder Danushka Gunathilika, but after the steady opener was dismissed by Imad Wasim, the spinner also had Milinda Siriwardana caught for a second- ball duck to leave Sri Lanka A perilously placed at 191/4.

An attacking innings of 29 from the swashbuckling Kithruwan Vithanage and cameos of 17 each from Asela Gunaratne and Sandakan saw the team to an imposing 278.

Wasim was undoubtedly the pick of Pakistan A's bowlers, capturing 4/29 from his full allotment of 10 overs and conceding a meagre 2.90 runs per over.

Sri Lanka A sealed the three-match series with their victory in the second one-dayer played last week.

The teams will now prepare for the first unofficial Test of the three-match series, which begins on May 6 in Colombo.