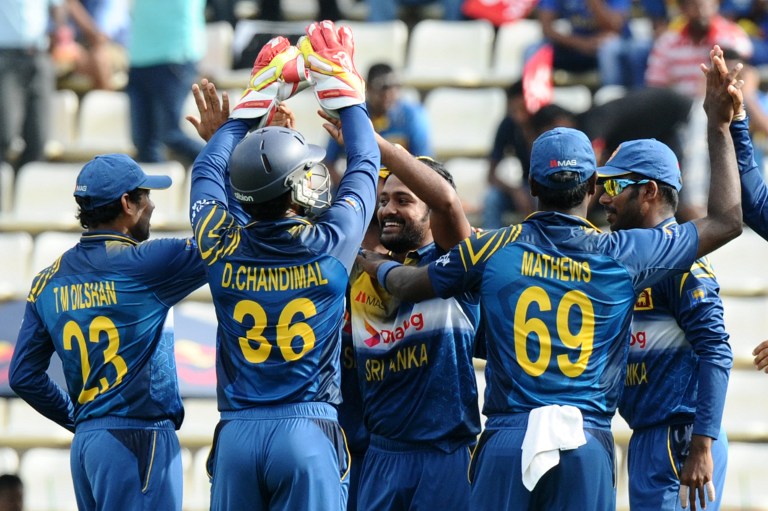 Highlights of the second ODI between Sri Lanka and Pakistan at the Pallekele International Cricket Stadium on July 15, 2015

The debutant from Kandy played an important role with bat and ball, giving his home crowd much to cheer about. © AFP

The tone setter: Bowling the first over, Sri Lanka’s captain Angelo Mathews showcased his desire to lead from the front. He proved the old adage: if you want something done right, it is best to do it yourself. Mathews laid down the blueprint for a strong Sri Lankan performance with a maiden to start the Pakistan innings.

The debutant’s magical moment: Sachith Pathirana grabbed the first wicket of the Pakistan innings thanks to an inside edge that shattered the stumps of the out-of-form Ahmed Shezad, who was looking to slog-sweep after an opening stand of 59. Pathirana celebrated in grand style as his home crowd went wild.

The veteran’s response: Shoaib Malik continued his excellent form following his return to the ODI side with a stunning 51, taking the attack to the Sri Lankan spinners before Angelo Mathews removed him with a delivery that nipped away and hit the timber to leave the visitors at 179/4.

Rizwan signals his intent: Mohammad Rizwan had meandered his way calmly to 22 by the 42nd over but showed he wanted to take the attack to Sri Lanka at the death with a stunning shot for four down the ground. Pakistan then went on to smash more than 50 runs in the remaining overs to set a daunting total.

Kusal gets going: After a streaky and rather unorthodox boundary to get off the mark, the swashbuckling Kusal Perera hit his straps in the following one, slashing Rahat Ali inside-out over cover, then cutting the ball straight to the fielder, before spanking two more fours and a six in the over on his way to the second-fastest fifty in ODI history in a Man of the Match performance.

The frantic flurry of wickets: With Tillakaratne Dilshan cruising in first gear, Rahat Ali responded after his initial poor spell with a stunning delivery that crashed into the stumps of Sri Lanka’s veteran opener to set the home crowd’s nerves fluttering. Pakistan then hit the ascendancy after Mathews was run-out thanks to some hesitation from the non-striker Lahiru Thirimanne. When the latter was caught brilliantly at third-man, Sri Lanka was floundering at 159/5 and the game had turned completely.

Pathirana proves potential: The debutant Pathirana unleashed several convincing strokes in a crucial partnership with Dinesh Chandimal, but truly showed he was one to keep after he elegantly drove Yasir Shah for a stunning boundary and later lofted him straight down the ground for a six. He advanced down the wicket to Shah to bring up the 50-run stand between the pair shortly after but he then threw it in the very next ball.

Sri Lanka edge home: Sri Lanka however still had plenty of batting left in the sheds, with quality stroke-players — the likes of allrounder Thisara Perera — coming in at No. 9. Although Perera was caught off a leading edge for 15, the damage had been done after a 37-run stand and Dinesh Chandimal soon polished off the required runs.