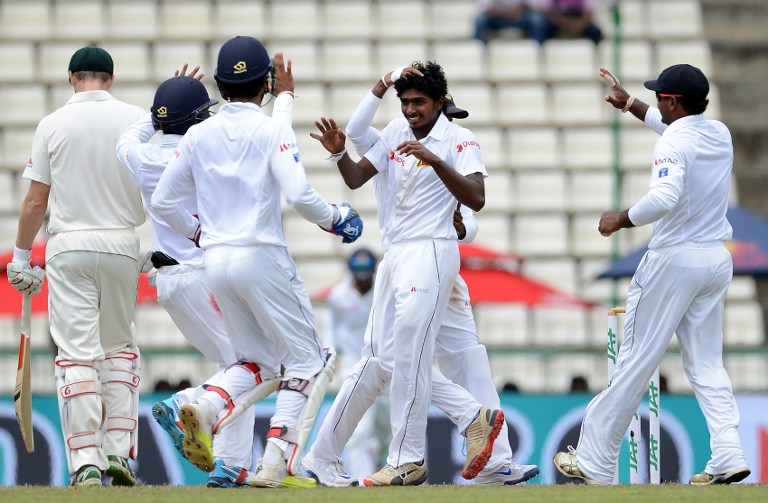 Sri Lanka put in a much improved display, following their poor showing with the bat on the opening day of the first Test against Australia at Pallekele.

The hosts were dismissed for a paltry 117 in their first innings after electing to bat first, but managed to bowl the Australians out for 203 on day two, thus restricting them to an 86-run lead. Sri Lanka then lost the wicket of opener Kusal Perera before play was stopped for the day due to rain.

The chief destroyers were Lakshan Sandakan, whose 4-58 gave him the best-ever figures for a chinaman bowler on Test debut, and the ever reliable Rangana Herath with 4-49.

Australia began the day on their overnight score of 66/2, but fell away soon after their captain Steve Smith had an uncharacteristic rush of blood, dancing down the track to Herath to grant Dinesh Chandimal the easiest of stumping chances.

The Australian captain ran past a Rangana Herath delivery and was stumped. © AFP

Khawaja then missed a straight delivery to fall leg-before to Herath, and at 70/4, Australia were wobbling.

Debutant Mitchell Marsh and seasoned veteran Adam Voges then steadied the ship with a 60-run stand — no mean feat on a track that was taking spin and had a two-paced nature.

Marsh, in particular, was pleasing on the eye with a couple of classic cover drives, but he was undone by a gem of a wrong 'un from Sandakan, who unreservedly celebrated his first Test scalp when the ball clattered into the stumps.

Peter Nevill then played a reckless and ambitious stroke, lofting a well-flighted Herath delivery straight into the hands of Perera at mid-on. Things did not look too comfortable for Australia at 137/6 and a slender lead, but the tail batted well to stretch the total out to 203.

Rain brought an early end to the day's play but not before Australia took the wicket of Kusal Perera. © AFP

Despite the valuable runs added by the Australian lower-order from a tough position, no-one could deny the outstanding job done by Sandakan, and Herath in particular was magnificent.

Equally important was the contribution of Nuwan Pradeep, who delivered an economical, pressure-building spell in the morning and caught the outside-edge of Voges bat, just when he was looking ominous.

In Sri Lanka's second innings, Perera, in a positive and aggressive move, was promoted up the order in the search for quick runs and a match-winning lead.

Sri Lanka would have been disappointed to lose the wicket of Perera just before a storm brought an end to the second day's play, with the score at 6/1; but the hosts should still be full of belief on the third day, having brought themselves back into the game thanks to their bowlers.

Sri Lanka's batsmen now need to ensure they do not let their side down again.