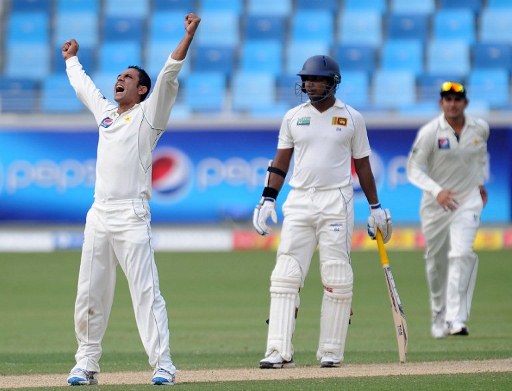 Umar Gul ripped through Sri Lanka’s top order with a burst of three wickets in his opening spell on the first day of the second cricket Test on Wednesday.

Gul broke through in only the third over of the match after Sri Lanka, electing to bat, slumped to 30-3 by the ninth over before struggling to 78-5 by lunch at the Dubai cricket Stadium.

Kumar Sangakkara, who scored a fighting 211 to help Sri Lanka draw the first Test at Abu Dhabi last week, was unbeaten on 29 and with him was Kaushal Silva (one) after Junaid Khan carried on the good work by Gul with two more wickets.

The 27-year-old paceman Gul trapped opener Lahiru Thirimanne (one) in front of the wicket with the second delivery of his second over as Indian umpire Shahvir Tarapore upheld the appeal for his maiden decision in his first Test.

Gul then had two wickets in his fifth over, as Tharanga Paranavitana slashed a wide delivery straight into the hands of skipper Misbah-ul Haq who held a sharp chance. Tharanga made six.

Off his sixth delivery, Gul had the experienced Mahela Jayawardene edging into the slips for Misbah to make two in two, leading by example in the slips after Pakistan floored seven chances in the first Test.

Amidst the wicket slide, Sangakkara held his nerves as he straight drove Khan for two fours to release some pressure at the other end. He also benefitted from a dropped catch when Taufiq Umar failed to hold a chance off spinner Saeed Ajmal.

Khan, who took a career-best 5-38 to dismiss Sri Lanka for a paltry 197 in the first innings at Abu Dhabi, dismissed Sri Lankan captain Tillakaratne Dilshan for seven, caught off a rash drive in the slip for Misbah’s third catch.

Khan then broke Sangakkara-Mathews brief stand of 28, when wicket-keeper Adnan Akmal held a faint edge off Mathews who made 19.

Sri Lanka were forced to make two changes as wicket-keeper batsman Prasanna Jayawardene, who hit a match-saving 120 in the first Test, was ruled out due to abdominal strain.

Pakistan brought in left-arm spinner Abdul Rehman for paceman Aizaz Cheema as the only change.