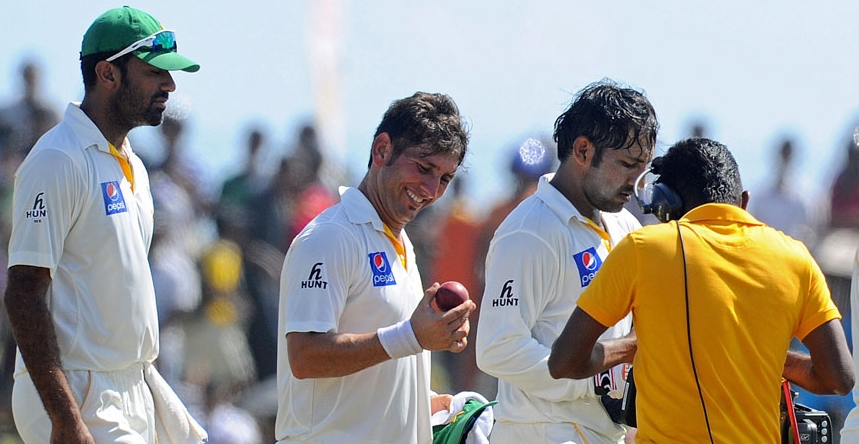 Yasir Shah claimed seven second innings wickets in a spectacular display of leg-spin bowling to destroy Sri Lanka as Pakistan crushed the hosts by 10 wickets in the first test to go 1-0 up in the three-match series at Galle on Sunday.

Shah, who had claimed two wickets in the first innings, took a career-best 7-76 in the second before Pakistan chased down the 90-run victory target in a little over 11 overs to register their first test win in Sri Lanka since 2006.

Openers Mohammad Hafeez (46) and Ahmed Shehzad (43) scored briskly as Pakistan came back from 96-5 in their first innings to win even after rain had washed out four sessions of the contest on the first two days at the Galle International Stadium.

Dimuth Karunaratne (79) was the highest scorer for the hosts who folded for 206, leaving Pakistan to score only 90 in the final session to win the match.

"When you have so many left-handers in the opposition and on a fourth or fifth day pitch with lot of footmarks, leg-spinners play important role and his (Shah) performance was key in our victory," Pakistan captain Misbah-ul-Haq said.

After Sri Lanka resumed the final day on 63-2, Shah struck with the first ball of the morning to dismiss nightwatchman Dilruwan Perera.

Karunaratne and Lahiru Thirimanne (44) then added 69 runs for the fourth wicket to steady the ship before wheels came off Sri Lanka's innings.

Thirimanne, who hit Riaz for two boundaries in the same over, edged the bowler to slip where Younus Khan took the catch.

Sri Lanka captain Angelo Mathews looked in discomfort against Riaz but was unlucky to be adjudged caught out at short leg.

Mathews immediately sought a review, convinced he did not nick it and replay did not suggest any edge either but the original decision stayed, prompting the batsman to leave the field shaking his head.

Karunaratne then succumbed to a rush of blood, charging out to Shah only to miss the ball and get stumped, a poor way to end an otherwise patient innings.

"It was pretty bad. We had to bat through and the morning session was crucial," Mathews said.

"We kept losing wickets… but we don't need to panic. It was just a one-off game, we need to keep our trust in the players."

Sarfraz Ahmed was adjudged man-of-the-match for his gritty 96 in the first innings to go with the three catches and as many stumpings he effected in the match.