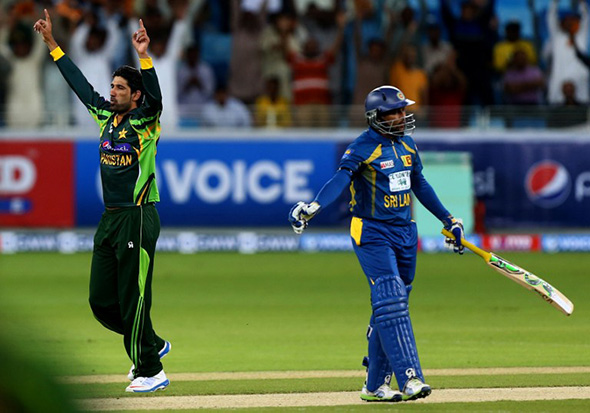 The loss of early wickets slowed Sri Lanka’s progress and hurt their chances of putting on a big total. © AFP

Pakistan beat Sri Lanka by three wickets in the first T20 at the Dubai International Cricket Stadium on Wednesday to take a one-nil lead in the two-match series.

After Pakistan won the toss and put Sri Lanka in, Dinesh Chandimal’s men struggled to take the attack to the opposition’s bowlers until Angelo Mathews opted to take a few risks later in the innings.

Mathews top scored with 50 off 34 balls, and combined with Lahiru Thirimanne (23 not out) to put on 58 runs for the fifth wicket.

The 18th over of the Sri Lankan innings was their most profitable, as Bilawal Bhatti was carted by Mathews for three boundaries in the over.

During Pakistan’s run chase, Sharjeel Khan and Mohammad Hafeez combined to add 57 for the second wicket, but a steady loss of wickets meant that their middle and lower order was tasked with winning the match for them.

Sri Lanka saw the back of the dangerous Umar Akmal under fortunate circumstances, when the third umpire ruled Akmal out after a straight drive from the striker ricochetted off the bowler Ajantha Mendis’ hand to find Akmal short of the crease at the non-striker’s end.

Ajantha Mendis celebrates with teammates after the fall of Umar Akmal’s wicket. © AFP

By the 17th over, Pakistan had lost six wickets and still needed 25 to win off 18 deliveries, but with Shahid Afridi in the middle Sri Lanka’s total was well within reach.

Afridi combined with lower-order batsman Bhatti to get Pakistan close, but with Pakistan needing seven to win off eight deliveries the pendulum swung again, with Bhatti losing his wicket after attempting an ambitious big hit off a Malinga slower-ball.

The match went down to the final over, however, Afridi sealed the deal in style for Pakistan with a paddle shot for six in the very first ball of the 20th over delivered by Nuwan Kulasekara.

The second and final match of the series takes place on December 13 at the same venue.

Sri Lanka must win the next match in order to retain their number-one ranking, while fourth-ranked Pakistan will take top position in the T20 rankings for teams if they win the series.