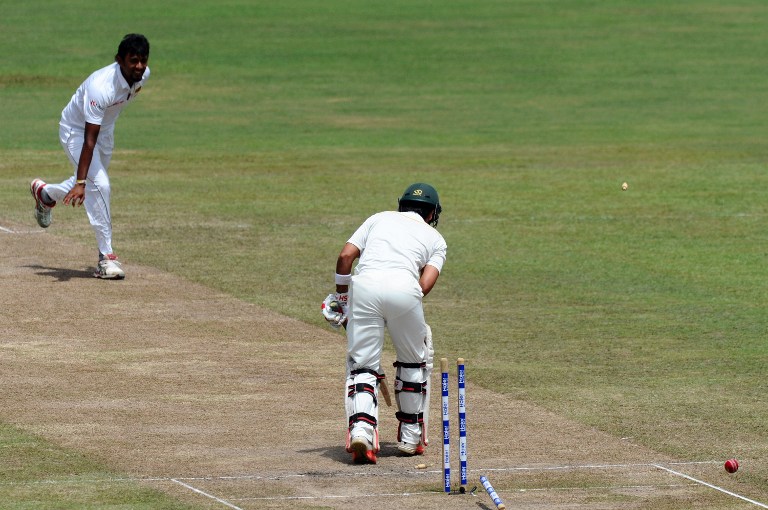 Chasing a daunting 377-run victory target, Pakistan were 99 for two wickets at tea against Sri Lanka on the penultimate day of the series-deciding third and final Test at Pallekele on Monday.

Angelo Mathews was the last Sri Lankan batsman to fall after a captain's knock of 122 as the hosts were all out for 313 in their second innings at the stroke of lunch.

Pakistan's chase got off to a horrible start when opener Ahmed Shehzad was clean bowled by Suranga Lakmal in the second over of the innings with the visitors yet to open their account.

Azhar Ali, Pakistan's most prolific batsman in the series, did not last long either, edging Dhammika Prasad to be caught behind as the visitors were reduced to 13-2.

Opener Shan Masood (52 not out) and veteran Younus Khan (41 not out) added 86 runs in a flourishing partnership to steady the innings.

Earlier, Pakistan fast bowler Imran Khan (5-58) mowed down the bottom half of the Sri Lankan innings with the second new ball for his first five-wicket haul.

Mathews, who was unbeaten on 77 overnight, added 117 for the sixth wicket with wicketkeeper Dinesh Chandimal (67) to stretch the team's lead.

The 28-year-old all-rounder, without the services of the retiring Kumar Sangakkara in this Test, held the middle order together after Rahat Ali had helped Pakistan reduce the hosts to 35-3 on the third day.

Mathews, on 88, survived a run-out opportunity and went past the three-figure mark with a clip off his hip against Rahat for two runs.

Imran came back after captain Misbah-ul-Haq took the new ball immediately when it was available and the right-arm paceman dismissed Chandimal with his second delivery of the morning's second spell.

He was on a hat-trick after getting Prasad to edge behind next ball but Tharindu Kaushal (eight) managed to block an incoming delivery.

The 27-year-old bowler went on to dismiss Kaushal and Suranga Lakmal and picked up his first five-for when Mathews fell caught behind after a 252-ball knock that included 12 boundaries and a six.