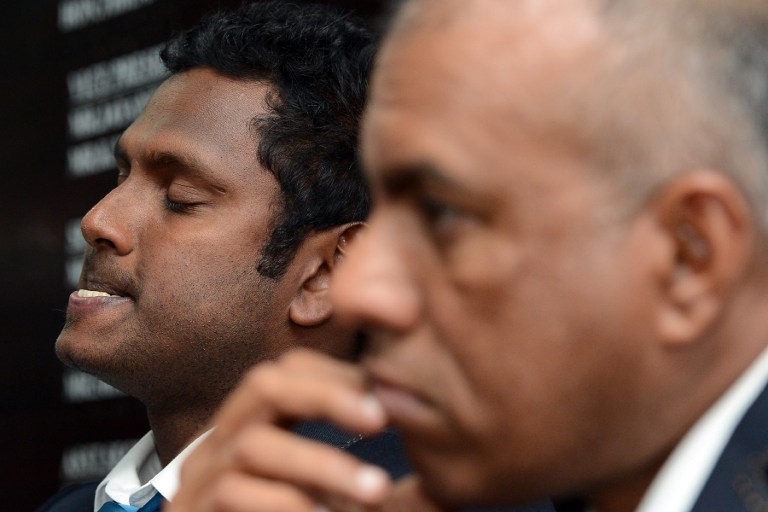 After a tough few months and the losses mounting, Sri Lanka captain Angelo Mathews will have no respite and must contend with the number-one ranked Test side Australia later this month. © AFP

Following a disastrous tour of England, where Sri Lanka were decimated in all three formats, including a 2-0 clean sweep in the Test series, there have been calls to depose Angelo Mathews as skipper. This is not the first time Mathews has been criticised for his captaincy.

Mathews was most-notably criticised for his defensive leadership after Sri Lanka allowed Pakistan to chase down 302 with five wickets in hand, and thus head to a series-levelling victory on day-five of the third Test in 2014. A better showing from Sri Lanka, and indeed Mathews as captain, would have handed Pakistan their first loss in the UAE since making it their home in 2010.

During last year's ODI World Cup in Australia and New Zealand, Mathews was lambasted for uninspired bowling changes and field placements which, critics say, led Sri Lanka to bleed runs in their match against the hosts in Sydney.

But in their aggressive calls for heads to roll in the hope that a captaincy change may lead to a reversal in fortunes, many Sri Lankan fans are forgetting not only Mathews's awe-inspiring performances in between those two fateful matches, but the reason he was initially seen as potential captaincy material in the first place.

Whilst Mathews originally shone for Sri Lanka with his blistering batting and consistent wicket-taking at Twenty20 level, it soon emerged that it was his fighting qualities which made him to stand out from the rest of Sri Lanka's young players.

Even in his first Test series, against Pakistan in 2009, Mathews showed character well beyond his years, walking to the wicket with the visitors scenting a potential victory on the fifth day. He joined veteran Kumar Sangakarra at the crease with Sri Lanka 277/4, chasing an impossible 492 for victory. Yet he hung around with Sangakkara, lasting just over three hours for his unbeaten 64 from 190 deliveries.

A year later, Mathews's never-say-die attitude allowed him to star in one of the all-time great come-from-behind victories in the history of ODI cricket. It seemed as though Sri Lanka had lost all hope after they sunk to 108/8, chasing 240 for victory in the cauldron of the great Melbourne Cricket Ground, but there was a sense of steely concentration in Mathews's eyes that night.

With impeccable focus and remarkable strength of mind and body, Mathews partnered with paceman Lasith Malinga in a world record 132-run partnership for the ninth wicket. Although Malinga was dismissed shortly before the winning runs were struck, Mathews remained unbeaten on 77 not out from just 84 balls. With a Man of the Match award to his name in that marvellous victory, the world suddenly fell in love with Angelo Mathews, and he was touted as a potential skipper for his determination when the chips were down.

Whatever can be said about his bowling changes and occasional defensive tactics, there can be little denying that Mathews has led from the front as a batsman. His knock of 160 during the second Test at Headingley will go down as one of the finest knocks played by an opposition batsman on English soil, and at that point in his career, Mathews was behind only Don Bradman for the highest batting average as a captain.

Mathews had by then played nine Tests as skipper for an incredible average of 78.83.  He also made a masterstroke bowling change, bringing lanky paceman Shaminda Eranga on for the final over of the match. The tall paceman bowled a fiery bouncer that ran off the bat of tailender Jimmy Anderson and was gratefully accepted by Rangana Herath. The supposedly dull and uninspiring captain of Sri Lanka had made an inspired choice and it paid off.

Sri Lanka are undeniably underdogs against Australia in the Test series starting shortly, and so it is important to remember what got Mathews his job as skipper — the ability to be at his best when his back is against the wall. Sri Lankan fans must give Mathews their utmost support to deliver, when Sri Lanka find themselves in a tough position once more.

Sri Lanka captain a major part of the team's problems

Mathews under fire as Aussies loom