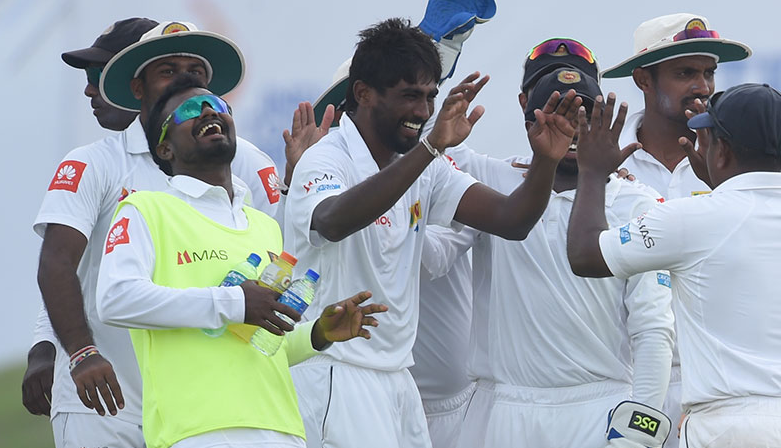 The Sri Lankan seamer was the lone bright spark for the home side. © AFP

Nuwan Pradeep picked up his maiden five-wicket haul in Tests during day two of the opening match of the three-Test series against India in Galle.

Playing in his 25th Test match, the 30-year-old was the pick of Sri Lanka's bowlers as India racked up the runs with 600 in their first innings.

Mukund was Pradeep's first wicket, which he took early on day one bowling around the wicket to the left-handed batsman with the new ball in hand. The Indian opener edged behind to wicket-keeper Niroshan Dickwella in the eight over of the match, off a deliver that was angled in but seamed away from him.

Pradeep's second wicket came more than 40 overs later, after century-maker Dhawan attempted to loft him over mid-off but only managed to give Angelo Mathews a simple catch.

India captain Kohli fell cheaply two overs later attempting to hook a short ball. Kohli top-edged to Dickwella for just three runs and his, like Dhawan's wicket, was a big one for the Sri Lankans who had been made to toil in the field by a mammoth third-wicket partnership.

Pujara, who looked sublime and was on 153 at the time, had no answer to a delivery from Pradeep that nipped away from back of a good length, to which he simply prodded a catch to the keeper.

Nearing a spirited half-century, lower-order batsman Ashwin had become a nuisance to the home side when Pradeep struck to claim his fifth wicket of the Indian innings. Ashwin gloved to Dickwella in a dismissal similar to that of Kohli's — both were late pulling and hooking Pradeep's bouncer and were caught behind after the ball flew past their left shoulders to the keeper.

Ravindra Jadeja was shaken up by a quick bouncer and found his middle stump uprooted by a searing Pradeep yorker the very next ball to give the pacer his sixth wicket.