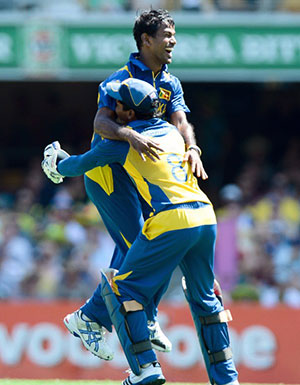 As unexpected as Australia’s embarrassing 74 was on Friday, just as shocking was the man who created the carnage — Sri Lankan quiet achiever Nuwan Kulasekara.

In 128 previous one-day internationals, the 30-year-old medium-pacer — who barely ever reaches 130km/h — had never taken a five-wicket haul.

Kulasekara registered his first before finishing his sixth over at the Gabba, almost single-handedly reducing Australia to 30/6 and setting up a four-wicket win.

Producing a brilliant mixture of swing and seam, combined with inch-perfect control, he bamboozled Australia’s top and middle-order.

Kulasekara had Phil Hughes caught at second slip before creating a hat-trick chance in his fourth over by having David Hussey caught behind, and then trapping George Bailey in front when he shouldered arms to his first ball — a hooping inswinger.

Better was to come when he bowled Michael Clarke — the only Australian batsman who looked in good nick — through the gate and then followed up with a near replica two balls later to rock Moises Henriques’ castle.

Kulasekara, with 138 ODI wickets at a modest 32, has largely been Sri Lanka’s tradesman working away as a support act to white-ball star Lasith Malinga.

But Friday he was the man, claiming 5/22 in 10 consecutive overs.

"Nuwan has been very consistent for us for quite a few years, and he’s built a nice little partnership with Lasith," said captain Mahela Jayawardene.

"It’s not just inswingers. He’s bowling the outer ones as well now, which keeps straight and a bit of seam as well.

"The thing today was he hit some really awkward areas for the Aussie batsmen, and especially on this wicket created a lot of problems."

Clarke was also full of praise for the way Kulasekara started with the new ball after the Australian skipper won the toss and enthusiastically batted.

"I think Sri Lanka deserve a lot of credit for the way they bowled," he said.

"They pitched the ball up and swung the ball in conditions that were conducive to that, but we let ourselves down with our shot-selection and our defence."