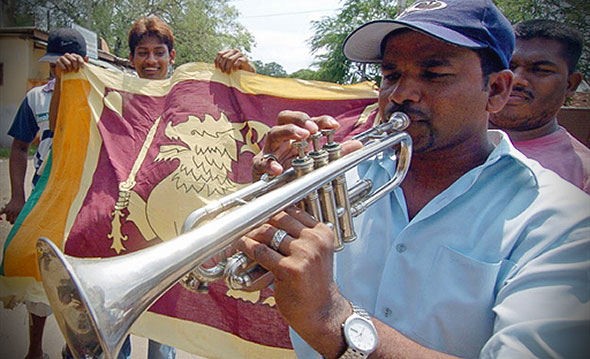 No musical instruments will be allowed at the cricket for the first time in Sri Lanka. AFP PHOTO/Lakruwan WANNIARACHCHI.

Known as the Papare (paa –per-ray) Band, Sri Lankan musicians armed with their trumpets, drums and cymbals have been an integral part of viewing cricket in Sri Lanka for a number of years. Cricket fans in Sri Lanka say watching a match won’t be the same without it.

"That’s what makes watching cricket in Sri Lanka special," Roshan Subasinghe, an avid Sri Lankan cricket fan said. "Not only is it unique to Sri Lanka but the players, too, feel that they are playing at home and in front of their home crowd when they hear the bands playing.

"From school cricket days these players have played their cricket at home to papare music playing the background. Why change it now? It wasn’t even done when we were at war during the 1996 World Cup"

But police chief Balasuriya stressed on the importance of an incident free World Cup.

"We want to have an incident free tournament. Steps have been taken to prevent any unnecessary incident," he said.

Sri Lanka will play their opening game of the 2011 World Cup on February 20 when they meet Canada for match-three of the tournament in Hambanatota.