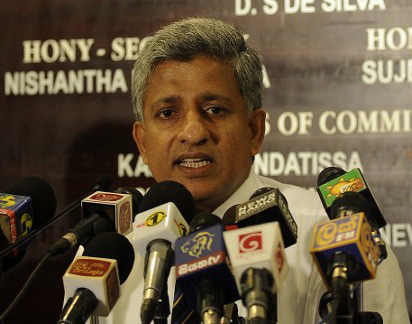 Sri Lanka Cricket today rubbished reports that it had been approached to host this year’s Asia Cup, which will be hosted by Bangladesh next month.

The ODI tournament organised by the Asian Cricket Council (ACC) has been played since 1984.

"There is no such thing. No one has asked us to host the Asia Cup," Nishantha Ranatunga, the secretary of the island’s cricket board, said.

"The original decision of the ACC stands."

Recent media reports claimed that Sri Lanka had been asked to prepare their venues for the tournament due to political violence in Bangladesh.

"There are a couple of meetings that will take place between now and the Asia Cup, but the Sri Lankan board has been told to prepare its stadiums as the event will be moved there in all likelihood," the Pakistani newspaper Dawn reported on Tuesday, citing an unnamed ACC official.

The Asia Cup takes place from February 25 to March 8 in Bangladesh.

Fixtures for the tournament are yet to be announced.