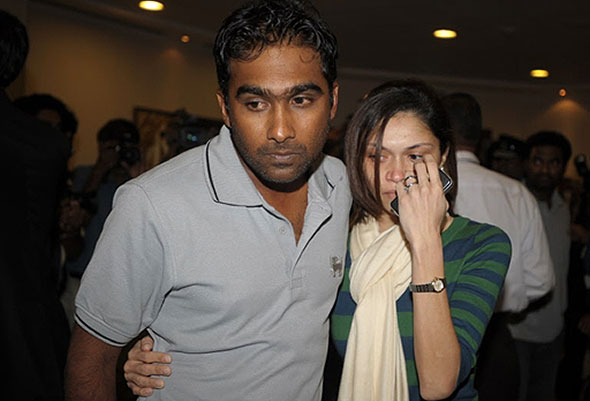 Mahela Jayawardene hugs his wife Christina Sirisena shortly after returning to the country on March 4, 2009 after escaping a terrorist attack in an ambush outside a cricket stadium in Pakistan. Seven members of the national team were wounded while eight Pakistani nationals were killed in the gun and grenade attack on March 3. AFP PHOTO/Lakruwan WANNIARACHCHI.

March 19, 2011 (Island Cricket): Nearly two years after a deadly attack on the bus, transporting the touring Sri Lanka Cricket team, by Pakistani militants in Lahore, action against the police officers who were assigned to provide security to the team is yet pending, despite the findings of a Pakistani judicial commission investigation.

The Punjab Provincial Assembly recently turned a blind eye to the Pakistani judicial commission finding, which indicated a lapse in security by the Punjab police contingent that was assigned to provide security for the Sri Lanka Cricket team, and the match officials of the International Cricket Council (ICC), who were travelling to the Gaddafi Stadium in Lahore on March 3, 2009.

A week after the incident the Pakistani government appointed a commission headed by Justice Shabir Raza Rizvi to investigate the causes for the security lapse.

The commission had pointed out that certain senior Punjab police officers at the time of the attack were negligent in their duties. The commission noted that the gunmen were able to flee easily after carrying out the attack in the commercial heart of Lahore. 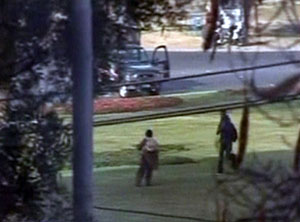 After official documents of the judicial commission findings were submitted, the Punjab Law Minister Rana Sanaullah, whilst presiding over a meeting to review the commission’s report, had stated that action against the police officers on duty on the day of the attack were only recommendations that were made and were not necessarily to be implemented.

In the wake of the attack, the Pakistani government and their defence establishment came under fire from certain sections of the international community and cricket officials that were involved in the second test match between Pakistan and Sri Lanka, for not taking adequate security measures to prevent the attack.

The Lahore police sleuths probing the attack at first had arrested nearly 60 suspects. Nearly three days after the attack, most of the suspects were released due to insufficient evidence. However, to date 28 persons have been detained in connection with the incident.

Investigations conducted by sleuths from the Pakistani police brought to light that the 28 suspects have been linked with the Jaish-e-Mohammed (JeM) and Lashkar-e-Jhangvi (LeJ) militant groups which have close ties with Al-Qaeda.

Pakistani investigators claim that the suspects had obtained military training and had been closely associated with religious clerics that have been in lawless tribal regions bordering Afghanistan.

According to US intelligence reports, the southern Punjab has turned into a nerve centre for extremism in Pakistan, which has thus resulted in groups such as JeM and LeJ expanding their influence in the region, by drawing recruits from the rural poor.

JeM has become a virtual extension of Al-Qaeda, and was blamed for most of the terrorist attacks in Pakistan after the country became an ally in the US-led invasion of Afghanistan in 2001.

A few of the backpacks the militants had carried had been recovered in an alleyway in Lahore with the haul of weapons at the scene of crime. The backpacks had contained protein bars, nuts, dry fruits and plenty of bottled water, making investigators reach the conclusion that the militants were planning on creating a hostage situation.

The sleuths from the Lahore police believe that the militants had carried out their operation in pairs and had possessed high-frequency communication sets in a bid to stay in constant contact.

The Lahore police investigators eventually shifted the angle of the investigation in what was seen as a bid to implicate India.

Haveeru reliably learns that in the backdrop of the attack, the Lahore police Crime Investigations Agency had grilled three Pakistani men who were arrested two months prior to the attack, under suspicion of spying for the Indian external intelligence agency, the Research and Analysis Wing (RAW), since 2005.

The Lahore police Crime Investigations Agency was trying to find out if the three intelligence operatives had any connection to the attack on the Sri Lanka cricket team. 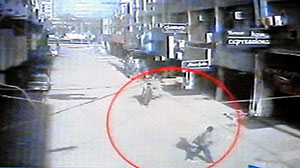 The three men were suspected to have been linked with a bombing of a marketplace in Lahore in 2006, and according to Pakistani officials they had been on the payroll of RAW and are believed to have provided photographs of military installations, details on the movements of Pakistani VIP’s and other classified information.

Before any preliminary inquiry was conducted, the head of the Pakistani Interior Ministry, Rehman Malik, at that time hinted of the possibility of Indian involvement in the attack.

Rather than mentioning India itself, Mr. Malik stated that they suspected a foreign hand in this incident.

“The democracy of the country has been undermined, and foreigners are repeatedly attacked to harm the country’s image,” he said. Even before ballistics and forensic investigations were carried out, he even went on to say that the weapons used by the militants had Indian markings.

The issue turned into a diplomatic one which made Islamabad and New Delhi lock horns once again.

On March 3, 2009, the hotel the cricketers and the match officials were staying in was swarming with security personnel from the Elite Force of the Punjab police (similar to Sri Lanka’s Special Task Force, the UK’s SAS and the USA’s SWAT) that were armed with a variety of weapons, ranging from Heckler & Koch MP5 submachine guns to Pakistani G-3 rifles.

The men from the Elite Force were clad in black combat pants and t-shirts which had “No Fear” plastered across their back, were seen carrying out regular security checks in every corner of the hotel. They were said to have even used sniffer dogs and had searched every guest that entered the hotel hosting the cricket teams.

The Sri Lanka team, at around 8.30 a.m. Lahore time, had boarded the bus. There were three jeeps, filled with Elite Force personnel, travelling in front of the bus and two police bikes on either side of it. The umpires and match referee were travelling in a mini-van behind the bus. Another police jeep trailed the umpires’ van, which in turn was followed by a police motorbike.

The traffic had been stopped and the lane was cleared with no vehicle in sight except for the VIP motorcade, which was the usual security measure that was adopted. As the convoy was travelling at a relatively high speed, the drive from the hotel to the Gadaffi Stadium usually took approximately 10 minutes.

During the matches played on the previous days, the bus carrying the Pakistani cricket team had always travelled together with the Sri Lankan bus. Strangely, in the morning of March 3, 2009, the Pakistani players had got held up and had decided to travel separately.

When the convoy was getting closer to its destination, a huge explosion was heard which was followed by a volley of gunfire at an area known as the Liberty Chowk roundabout, which is a popular commercial hub in Lahore. 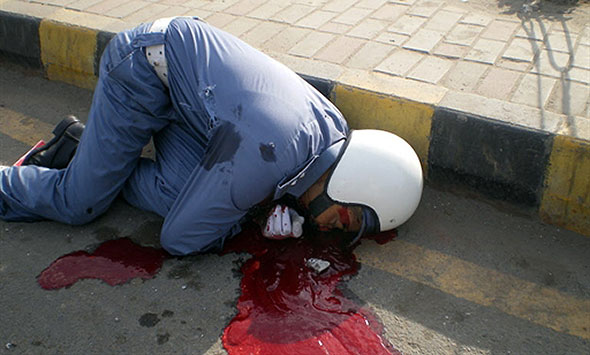 The body of a Pakistani policeman lies on a road after a deadly ambush on the Sri Lankan cricket team in Lahore. AFP PHOTO/ Sameed QURESHI.

A RPG shell, which was fired by the militants, had just fallen between the bus and the mini-van. The panic-stricken players in the bus then ducked. The International Cricket Council (ICC) officials who were in the mini-van were on top of each other trying desperately to dodge bullets and shrapnel.

The assailants then began firing repeatedly at the bus. Two of the gunmen, who had been moving towards the bus, then started to hurl grenades, which fell short of the bus. The first few shots which were fired at the bus riddled the windscreen. At that point the bus came to a standstill.

The bus was unable to move forward as it had been blocked by two white cars, which had been reversing towards it. At that point it was not clear if the two cars were driven by the militants. However, it seemed baffling as to what two cars that did not belong to the motorcade were doing in the middle of the road when there was VIP movement, and all traffic in that lane had been cleared for the cricketers to travel.

The cricketers then shouted at the driver to go and within minutes the driver reached the Gaddafi Stadium, while the minivan that had the ICC officials, was stranded with their driver shot and the forth umpire as well as the liaison officer critically wounded.

As the bus was out of danger, the gunmen then started to attack the van. There was no retaliation, no Elite Force, it was just the stranded ICC officials. The gunmen were then seen getting into three-wheelers and leaving after the job was done.

It is learnt that an anonymous call made to one of the heads of security in charge of the Sri Lanka cricket team resulted in the police taking a different route to the stadium. The caller was said to have asked police escorting the Sri Lankan team to use a different route leading to the stadium instead of travelling along the usual road. The most astounding fact was that the police followed the caller’s instructions even without ascertaining his identity. 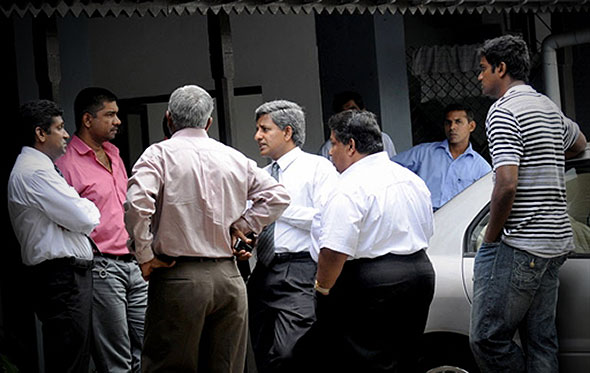 Sri Lanka Cricket (SLC) officials discuss matters at the SLC headquarters in Colombo as news reaches the island on the attack on team members in Pakistan. AFP PHOTO/Lakruwan WANNIARACHCHI.

Previously the Pakistani intelligence arm, Inter-Service Intelligence (ISI) carried out a threat assessment and discovered that there could be a possible threat on the Sri Lanka cricket team, either at the hotel or while travelling. Details of the threat assessment were then conveyed to the Criminal Investigations Agency of Pakistan. This was later conveyed through a letter dated January 22, 2009, by the Agency to the then local police chief in Lahore.

A meeting was then held at the Lahore police headquarters with the ISI officials, Criminal Investigations officials, senior Elite Force officers and senior police officers attached to the Lahore Police on January 23.

However, the threat assessment was eventually ignored as the federal government, led by Pakistani President Asif Ali Zardari, replaced several senior police officers as a result of a reshuffle of his administration, several weeks prior to the Sri Lankan cricket tour to Pakistan. 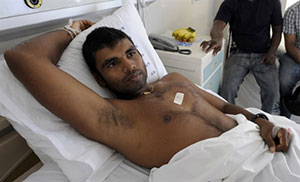 The threat assessment carried out by the ISI was not the first sign which indicated the volatile situation in Lahore and the threat leveled against a foreign sporting team visiting Pakistan.

Despite many claims, Pakistan has denied any lapse in intelligence or security provided to the cricketers and the ICC officials. The attack on March 3, 2009, is the first time a national sporting team has been attacked since the Munich Olympics massacre of Israeli athletes in 1972. What really happened and who should be held accountable for the attack still remains a mystery. The attack has sent out a chilling message which sporting nations should learn from. The greatest challenge that lies ahead for sporting nations is how they will cope with the rapidly growing threat of terrorism.

This article first appeared on The Haveeru Daily in Maldives.