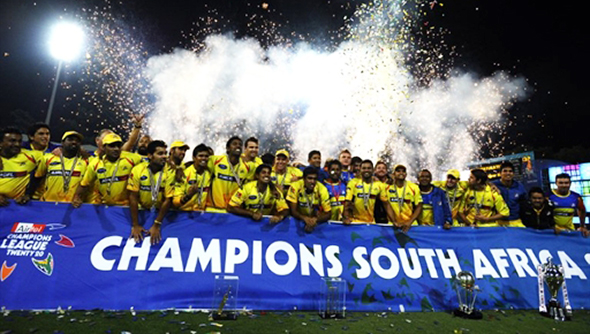 Chennai Super Kings cricket squad celebrates after their victory over the Warriors during the Final of the Champions League Twenty20 League match between Chennai Super Kings and Warriors at the Wanderers Stadium in Johannesburg, South Africa on September 26, 2010. AFP PHOTO/STEPHANE DE SAKUTIN.

September 26, 2010 (Island Cricket): The Chennai Super Kings completed a magnificent double when they added the Airtel Champions League T20 title to the Indian Premier League title which they won earlier this year.

There was no doubting the Chennai Super Kings’ superiority as they beat the Warriors, the South African Pro20 champions, by eight wickets in the Champions League final, at the Wanderers Stadium on Sunday evening.

They had earlier beaten the Warriors by 10 runs in their Group A match.

The writing was on the wall for the Warriors when they were restricted to 128 runs in their innings after winning the toss. Davy Jacobs got his side away to their normal excellent start smashing 34 off 21 balls as the Warriors reached 40 in their first 5 overs for the loss of Ashwell Prince’s wicket. 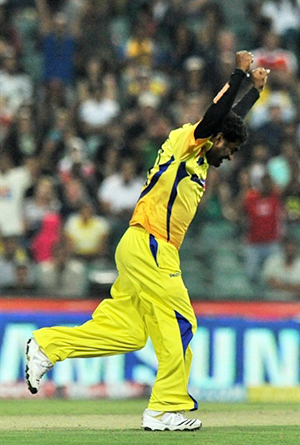 But the match swung decisively in favour of the Chennai Super Kings when Ashwin dismissed Jacobs in his first over and then he and his fellow off spinner, Sri Lankan legend, Muttiah Muralitharan, took 5 wickets for 32 runs in their eight overs.

There was a flurry of hitting from Craig Thyssen towards the end of the innings but the total of 128 never looked like being enough.

This became even more apparent when both opening batsmen, Murali Vijay and Michael Hussey, posted half-centuries and the Super Kings cantered past the post with 8 wickets and a full over to spare.

The Super Kings’ success may have pointed to a new direction that T20 cricket is following. Most franchises can match one another in terms of power hitters and innovative batsmen but the Chennai franchise had a bowling attack that could defend any total. In four of their six matches they bowled their opponents out in their 20 overs and it was only the Warriors who did not lose all 10 wickets against them in any of their matches.

They had an excellent top three in Vijay, Hussey and Raina but their leading bowlers contributed as much as the batsmen to their success.

The Warriors can also look back on an excellent tournament with pride. They confirmed the strength of the South African domestic game and the Eastern Cape franchise took home more than R10-million from the tournament including the fee they received for releasing Jacques Kallis to the Royal Challengers Bangalore.

The final drew a full house which brought the curtain down on another very successful international tournament in South Africa.