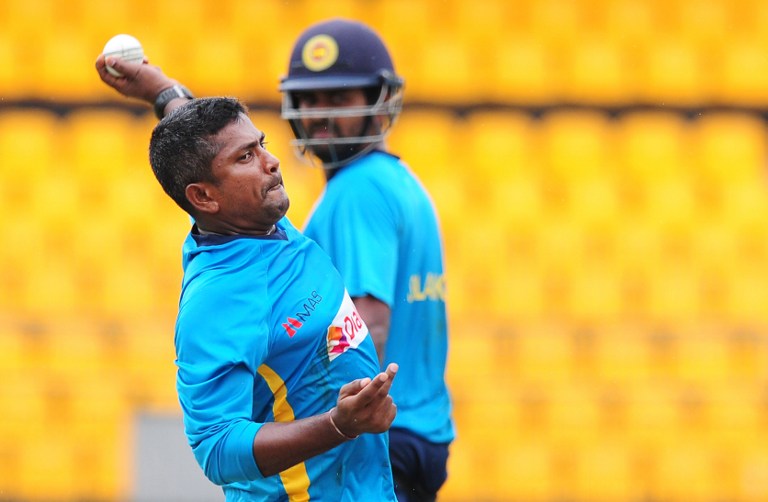 Sri Lanka were hoping to capitalise on wearing pitches later in the tournament. © AFP

If your hope is for spin to play a major role at this ICC Cricket World Cup, then I believe you are likely to be disappointed.

It is true the tournament in Australia and New Zealand is taking place at the back-end of the season and normally you might expect to see dry and tired pitches offering turn for the slow bowlers.

But, while the very best spinners have a chance of featuring near the top of the wicket-taking charts, I am not holding my breath for them to dominate that chart.

Why? Well to start with, I am not expecting pitches to be all that tired and worn. Remember several of the Australia venues have now switched to drop-in surfaces and even in the cases of those that have not, I am sure curators will be keeping their pitches for the tournament fresh as this is cricket's ultimate showpiece and they will not want to be seen to produce conditions that are anything less than perfect.

My experience of both countries is that, although both are very different, neither will offer very much assistance to spinners, especially in matches where, in 100 overs, you are unlikely to see much deterioration in the pitches.

There will be bounce in Australia, which is always the spinner's friend, but not much purchase off rock-hard surfaces, while in New Zealand, with conditions likely to be cool at that time of the year, especially on the South Island, I expect seam bowlers to rule and spinners will play more of a holding role.

That is not to say that spinners cannot prosper. I took 58 one-day wickets in Australia, a mark I only bettered in my home country and in the United Arab Emirates, but I also know it can be hard work and you need to find other ways of getting batsmen out beyond beating them with turn off the pitch. Maybe you mix up your pace, vary your flight or your angle of delivery or maybe you just keep it tight and prey on a batsman's patience in the hope of forcing a mistake.

Pakistan's Mushtaq Ahmed finished second in the list of wicket-takers with 16 victims in 1992, the last time the tournament took place in Australia and New Zealand. But at the same time, he was the only slow bowler to reach double figures and that illustrates the difficulties I am sure will be similar this time around.

The larger grounds in Australia will, at least, give spinners the chance to flight the ball, safe in the knowledge it will require something more than a mishit to clear the boundary, but the use of two new balls will tend to cause the ball to skid on rather than spin. And while the restriction brought in a couple of years ago, with only four fielders allowed outside the 30-yard circle except in the powerplays, will help spinners build pressure if a batting side is losing wickets, it also means there is nowhere to hide if a slow bowler come on with the batsmen already on top.

Good spinners will adjust, cope and even prosper, and of Sri Lanka's duo of front-liners, Rangana Herath will enjoy the ball skidding on as that is one of his main weapons, while the tall Sachithra Senanayake will benefit from the extra bounce he will generate on Australian pitches.

However, I am not sure you will see them play together very often and I expect most sides to rely on just one specialist spinner and most of the rest of the overs bowled by the quicker men, perhaps supplemented by a part-timer which, in Sri Lanka's case, would be Tillakaratne Dilshan.

The recent crackdown on bowlers with suspect actions means we are unlikely to see very many doosras bowled and that is a shame. Pakistan's Saqlain Mushtaq and I are living proof it can be bowled within the 15 degree level of tolerance but it is still a difficult art to master.

As for that crackdown, as someone who has lived and suffered under the old system of umpires calling bowlers on the field for throwing without that bowler having any means of redress, I am very much in favour of the way things are now being done.

The new protocols mean that any bowler who is suspected of throwing now has the chance to prove himself scientifically, and that is fair. After all, you are talking about players' livelihoods and their careers — everything. The matter is being handled properly now, I have no doubt about that.

The old method of condemning a bowler without a right of reply helped make me public enemy number one in Australia but it also made me determined to prove myself, and I did, throughout my career — eventually supported by science.

And now my playing days are over, I am not one for looking back with anger. You cannot keep hatred or upset in your heart. My motto is forget and forgive, and the fact I was employed to help the Australian team last year shows I am not the only one with that view.

Life is about looking forward. And I am looking forward to the ICC Cricket World Cup and the chance to watch it without the pressure of having to perform.