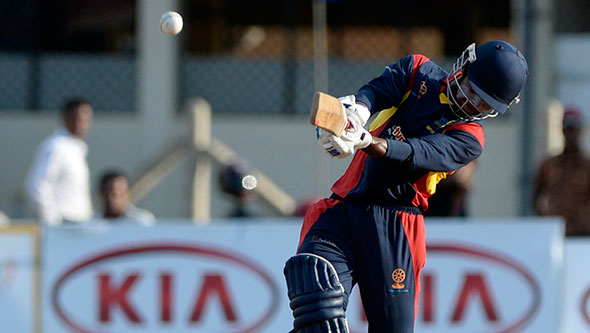 The semi-finals of this year’s tournament will be held on November 4. © Murali Cup

Defending champions St. Peter’s maintained their unbeaten run in the competition despite a good performance from Anuradhapura Central’s bowlers. Peter’s made 137 and then restricted Anuradhapura to 122/8.

Trinity College lost their first game of the tournament to Cricket Seenigama, who bounced back after a shock loss on Saturday to Trinco-Batti Combined, but still qualified in their Kilinochchi group.

Dharmashoka College were also able to maintain their unbeaten record with a 23-run victory against St. Sebastians Katuneriya in a rain-reduced 10 over game at the IODR Oval in Oddusudan.

While Trinity, St. Peter’s and Dharmashoka qualified automatically by virtue of winning their respective groups, Cricket Seenigama claimed the final semi-final berth as the best qualifier with a net run-rate of +1.198, which was higher than Jaffna (+0.491) and St. Sebastian (+0.777).

Trinity College will now play Dharmashoka College in the first semi-final at the IODR Oval on November 4 at 10am and St. Peter’s College will play Cricket Seenigama in Kilinochchi at 2pm on the same day.

[Photos: Sangakkara a hit with players and spectators on day two of Murali Cup]

The match went to a super over after scores were tied on 102, but Mullaitivu chased down a target of 11 in the super over to spark off emotional celebrations from a squad that only started playing hard ball cricket a few weeks before the 2012 Murali Harmony Cup.

The Murali Harmony Cup is a T20 tournament organised by Muttiah Muralitharan’s charity the Foundation of Goodness. The five-day event featuring under-19 schoolboys and under-23 women’s cricketers is being played at venues across Northern Sri Lanka — in the towns of Jaffna, Oddusuddan, Mankulam, Kilinochchi and Vavuniya from November 1-5.