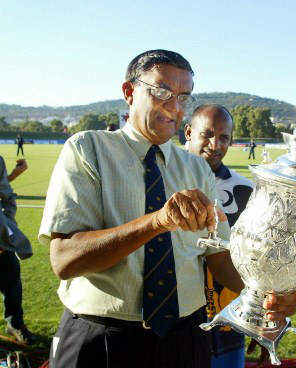 Just weeks after it was revealed that former coach Geoff Marsh had sent Sri Lanka Cricket (SLC) a letter of demand over his sacking, the head of security for the World Twenty20 tournament in Sri Lanka Shane Dullewa has filed legal action against the crisis-ridden cricket board over his removal.

Dullewa, who was sacked on May 30, has filed for Rs 50 million (approximately US$ 385,000) in damages and is seeking reinstatement.

However, sports minister Mahindananda Aluthgamage told parliament on Wednesday Dullewa was removed after his security proposal for the World Twenty20 tournament was rejected by the International Cricket Council (ICC).

But according to a report on Sri Lanka’s Daily Mirror newspaper, Dullewa had been removed by SLC chief executive Ajit Jayasekara based on "unsupported allegations about flaws in a security dossier submitted to the ICC."

"Dullewa stated that the CEO had no power to terminate his services and pleaded that he was not granted a hearing or called to show cause before his dismissal," the report said.

Dullewa claims he was removed after complaining to Jayasekara about the theft of documents from his office, which were removed allegedly at the behest of Sri Lanka’s tournament director for the World Twenty20 Upeka Abeykoon-Nell.

SLC is currently in the midst of an unprecedented financial crisis after co-hosting the ICC Cricket World Cup last year. The mismanagement of World Cup venue construction, by the government-appointed interim committee at SLC, led to budget overruns that has left the cricket board in a penurious state.

After being unable to pay Sri Lanka’s contracted cricketers their wages for nearly 12 months, SLC in February obtained a Rs 600 million loan from the state-owned Bank of Ceylon to help pay wages.

The cricketers are however still owed several months in back pay, Island Cricket has learned. In addition, the signing of new contracts for this year has been delayed in part due to monies still owed to players from the previous contract period.

According to Aluthgamage, SLC will also terminate the services of more than 50-percent of its staff shortly.