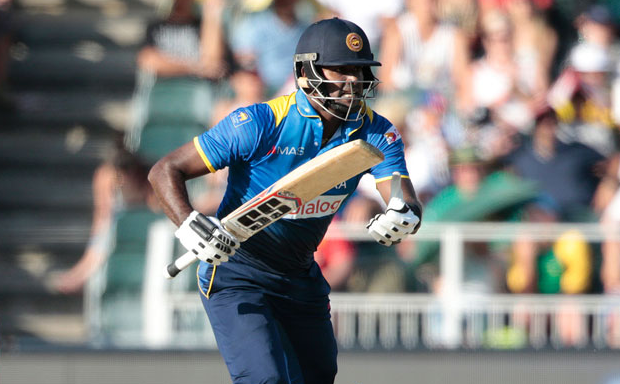 Angelo Mathews returned to form but he could be out of action for weeks. © AFP

Batting with a twisted ankle, Sri Lanka captain Angelo Mathews led from the front with an unbeaten 54 from 50 balls to guide Sri Lanka to a nail-biting three wicket win against South Africa in Johannesburg in the second T20 of the three-match series on Sunday. It was their first taste of victory on their South African tour.

Mathews hit three sixes and a four in his innings and batted through pain, turning down singles with the tail to hold on to the strike, to play a gutsy innings to see his side over in a thrilling final-over finish.

"It looks pretty bad, it looks like I'll be out for a couple of weeks maybe — I twisted my ankle," Mathews said, speaking of the injury he sustained during Sri Lanka's run chase.

"It was a much-needed win for us, it will boost the morale of the camp," he added.

On what was supposed to have been the flattest of batting pitches, commentator Mike Haysman suggested it would be the "first of many boundaries" after Jon-Jon Smuts struck Mathews for four in the opening over.

But, thereafter, Nuwan Kulasekara and Mathews proved economical, with the former claiming the first wicket, when Smuts was caught by Lakshan Sandakan at short fine-leg, trying to leg-glance an in-swinger to the boundary. Thanks to Sandakan's low catch, South Africa were 5/1 and the tourists had silenced the Bullring crowd.

Making a comeback to the side, medium pacer Isuru Udana then struck with his first ball, removing Theunis de Bruyn for seven to leave the score at 13/2. De Bruyn flicked Udana off his pads, straight to Dhananjaya de Silva at deep square-leg, and was noticeably upset by the soft nature of his dismissal as he walked off.

Promoted up the order, the hard-hitting Mangaliso Mosehle made an immediate impact by striking a few boundaries and making the most of a fast outfield. There were a few run-out chances, but at 41/2 after six overs, the ship was looking a little more steady for the Proteas by this time.

Sri Lanka's other hero was chinaman bowler Sandakan, who took 4-23.

The stadium then was in full voice for Sandakan's first ball, and it certainly wasn't a good one, but Mosehle chased it nonetheless, edging a wide delivery he barely got to, even at full stretch. Wicket-keeper Dinesh Chandimal certainly wasn't complaining, and he gleefully accepted an edge that brought Sri Lanka back into the game at 43/3.

Next, David Miller embarrassingly missed a sweep off a wrong 'un and it continued to set the tone for how the South Africans would struggle to pick Sandakan throughout the day. A wonderfully sharp piece of work by Chandimal resulted in a stumping in his next over. Sandakan had this time removed Heino Kuhn, who had top scored with a well-made and balanced 29.

It was 57/4 and South Africa were in trouble. But it was Miller and Farhaan Behardien, South Africa's most-experienced pair, that had brought them back into the game at SuperSport Park.

Knowing then, that breaking the partnership was vital, Mathews continued to attack, even putting in a slip for off-spinner de Silva. He duly became the third bowler to take a wicket with his first ball, claiming Miller after an excellent take from the captain himself at slip.

Wayne Parnell and Andile Phehlukwayo both fell to unnecessary reverse-sweeps off Sandakan and it was 74/7. The question from Haysman now was not how many boundaries would be struck but whether the hosts would actually manage to bat out their 20 overs.

Behardien, who had been at the other end during the flurry of wickets, managed to string together a vital 33-run stand with Aaron Phangiso. Behardien struck 27, while Phangiso partnered him for a sensible 13.

It was Udana who removed the skipper on his return to the bowling crease, having him caught behind to leave the score at 107/8. Kulasekera then sent Imran Tahir's off stump flying, sending the spinner on his way for one.

A good running catch from Asela Gunaratne off Udana ensured South Africa were mopped up for 113, leaving Sri Lanka with their best chance for victory on the tour.

Sri Lanka got off to a poor start with the bat again and lost two wickets into the third over. The first to go was opener de Silva (2) and Kusal Mendis (4) soon followed. Niroshan Dickwella (22) became Lungi Ngidi's third victim, with the score on 35/3 in the tourist's reply.

A steading partnership between Chandimal and Mathews set them back on track. Once again, it was Ngidi who broke the partnership, having Chandimal nicking behind for 22 at 86/4. That is where things began going pear-shaped for Sri Lanka.

Imran Tahir was jubilant after having Gunaratne leg-before for three, and not known for his fielding, he then claimed Seekkuge Prasanna with a brilliant juggling catch on the boundary off Smuts. When Thikshila de Silva was caught by Behardien, and then Mathews rolled his ankle a ball later, things looked done for Sri Lanka at 106/7.

Sri Lanka's captain was dropped off the first ball of the last over. He went onto hit Smuts for a huge six, and knowing he couldn't run, refused the single and then went straight down the ground for another massive six to deliver a thrilling three-wicket win in the final over.

The series decider takes place on January 25 in Cape Town.