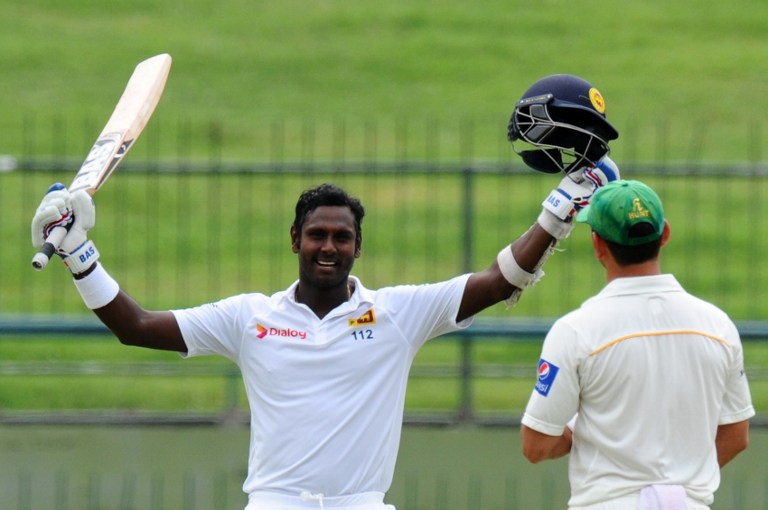 Sri Lanka were all out for 313 in their second innings at the stroke of lunch after resuming on 228-5 and Mathews was the last man to fall after a captain's knock of 122.

Pakistan fast bowler Imran Khan (5-58) mowed down the bottom half of the Sri Lankan innings with the second new ball for his first five-wicket haul.

Mathews, who was unbeaten on 77 overnight, added 117 for the sixth wicket with wicketkeeper Dinesh Chandimal (67) to stretch the team's lead.

The 28-year-old all-rounder, without the services of the retiring Kumar Sangakkara in this Test, held the middle order together after Rahat Ali had helped Pakistan reduce the hosts to 35-3 on the third day.

Mathews, on 88, survived a run-out opportunity and went past the three-figure mark with a clip off his hip against Rahat for two runs.

Imran came back after captain Misbah-ul-Haq took the new ball immediately when it was available and the right-arm paceman dismissed Chandimal with his second delivery of the morning's second spell.

He was on a hat-trick after getting Dhammika Prasad to edge behind next ball but Tharindu Kaushal (eight) managed to block an incoming delivery.

The 27-year-old bowler went on to dismiss Kaushal and Suranga Lakmal and picked up his first five-for when Mathews fell caught behind after a 252-ball knock that included 12 boundaries and a six.