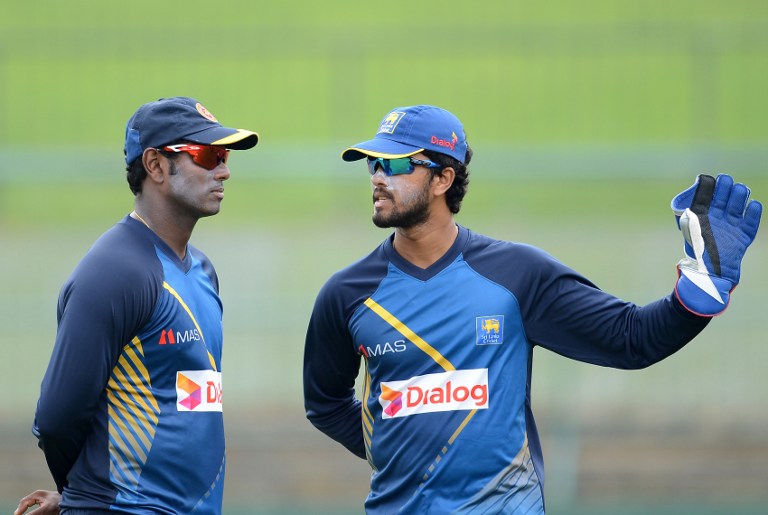 Australia have indicated they will be targeting Angelo Mathews and Dinesh Chandimal in Sri Lanka's batting order. © AFP

The winners of the toss at Pallekele will be foolish not to bat first on a pitch expected to be at its best for batting on days one and two. Conditions will then deteriorate as the game goes on. Four Tests have been played at the Pallekele International Stadium, with only one of those not resulting in a draw.

The Australians will be hoping to pile on a big score, should they be given the chance to bat first on such a quality wicket, before looking to bowl the hosts out relatively cheaply. Weather-wise, rain is forecast for the majority of the Test, making quick wickets essential to achieving a positive result for either team. Rain has curtailed four of the five Tests at the ground, with the one exception being a win for Pakistan.

The wicket could favour seamers and Jackson Bird will be licking his lips, having been in good form for the Australians in their tour match with 2-26 from 11 overs in the first innings. Bird will suit the Pallekele pitch, being a paceman capable of getting troubling movement off the seam and the pitch.

In Australia's previous and only visit to Pallekele, bustling fast bowler Ryan Harris claimed six wickets for the match, but spinners such as Rangana Herath should not be discouraged. Herath has a total of 11 wickets from three innings at the ground. He has certainly caused visiting batsmen headaches, despite the sometimes green nature of the pitch.

How Sri Lanka's batsmen cope with the balanced and varied Australian attack will be crucial to their success. Nathan Lyon did well on his debut tour here, snaring the wicket of Kumar Sangakarra with just his second ball in Test cricket, while their other spinner Steve O'Keefe is in stunning form with a 10-wicket haul in the practice match against a Sri Lankan XI.

Milinda Siriwardana has been left out of the squad despite a half century in that game. Dhananjaya de Silva, Roshen Silva, Vishwa Fernando and Asitha Fernando may possibly make their debuts for Sri Lanka.

The visitors have let it be known that they will be targeting two key Sri Lankan batsmen, including "under pressure" captain Angelo Mathews.

"Look, he's under pressure," Australian quick Mitchell Starc said. "He'd be under pressure after the English tour, and as a captain he'll have to go through that pressure and perform as well […] so no doubt we'll put a lot of pressure on Angelo to perform. He's got to lead as captain, so he'll be a big wicket for us along with Chandimal."

The Australians are rightly favourites, with such a balanced bowling attack and a pair of quality opening batsmen in David Warner and Joe Burns, as well as a rock-solid middle order; but if Herath can follow his usual trend of prolific wicket taking in Pallekele and some of Sri Lanka's exciting young batting talent stand up to the daunting task ahead of them, the hosts may somehow spring a surprise.