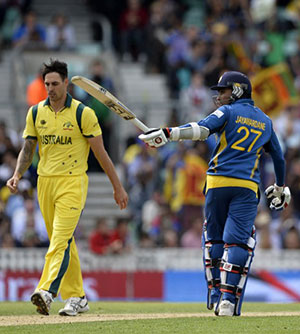 Veteran Mahela Jayawardene brought all his experience into play, as he struck an unbeaten 84 to guide Sri Lanka to a respectable 253 for eight in their ICC Champions Trophy match against Australia.

Jaywardene made his runs off 81 balls and was involved in a partnership of 65 for the sixth wicket with Dinesh Chandimal who contributed 31 off 32 balls.

Australia will need to chase down the target in 29.1 overs to ensure a place in the semifinals from Group A alongside England.

The Lankans held the edge at the break, but in the event of Australia winning the game after 29.1 overs, New Zealand will be through.

Sent into bat, Sri Lanka were off to a poor start, losing two wickets with just 20 runs on the board.

The islanders lost Kusal Perera early, with seamer Mitchell Johnson having the left-handed batsman trapped in front of the wicket.

Clint McKay took the big wicket of Kumar Sangakkara, when he had the experienced Sri Lankan batsman trying to play his trademark shot through the cover region, only to be caught by Glen Maxwell.

Tillakaratne Dilshan and Lahiru Thirimanne added 72 runs for the third wicket to steady the ship, before left-arm spinner Xavier Doherty sent back the opener — caught at slip by a diving Shane Watson for a 58-ball 34. Diving to his right, Watson picked the ball low and one-handed.

After labouring his way to a patient 57 off 86 balls, Thirimanne was done-in by Johnson, as he pulled a short and quick delivery outside off to Watson at midwicket. He hit four boundaries during his knock.

After Thirimanne’s dismissal, Sri Lanka had made 128 for four, and it was time for Jayawardene to take charge of the situation, which he did remarkably well to take Sri Lanka to a competitive total.