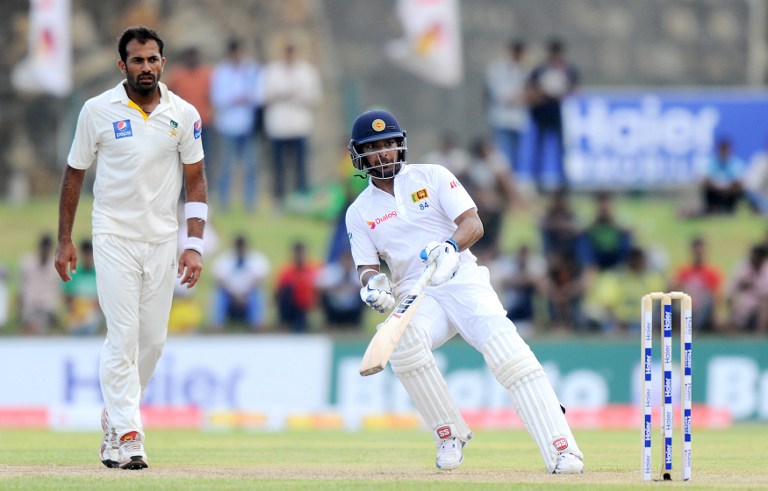 Wahab Riaz bowled with pace and brought Pakistan back into the game with Kumar Sangakkara's wicket. © AFP PHOTO

Kaushal Silva stayed on course for his second test hundred after featuring in a century-plus stand with Kumar Sangakkara to help Sri Lanka to 178 for three on day two of the first test against Pakistan at Galle on Thursday.

Dropped early in the morning session, the right-handed opener struck an unbeaten 80 as he and experienced Sangakkara (50) added 112 runs for the second wicket on a day when rain and bad light allowed only 64 overs of play.

Sri Lanka captain Angelo Mathews was batting on 10 at the other end when stumps were drawn.

After rain had washed out nearly four sessions, Pakistan captain Misbah-ul-Haq won the toss and decided to bowl, trusting his bowlers to exploit the freshness of the pitch and with a bit more luck and discipline, the visitors could have dismissed both the openers by the eighth over.

Left-arm paceman Wahab Riaz, whose fiery spell against Australian Shane Watson was one of the highlights of this year's World Cup, had Dimuth Karunaratne caught in the slip in his first over but it turned out to be a no-ball.

More misery awaited Riaz in his fourth over when Silva cut a delivery to backward point where Yasir Shah not only grassed it but also hurt himself, requiring medical attention.

Riaz, whose early struggle for rhythm was evident in the three no-balls he sent down in his first six overs apart from being warned for running onto the pitch, eventually got a modicum of revenge in his fifth over after changing ends.

The bowler hurried Karunaratne (21) into a pull shot with a sharp, rising delivery and Sarfraz Ahmed collected the edge behind the stumps.

Sangakkara hit the first ball he faced from Riaz to the boundary and was peppered with a barrage of short balls in the bowler's next over.

Silva hit Riaz for two boundaries in an over before taking two runs off Shah to bring up his patient fifty in 122 balls.

Sangakkara charged out to hit left-arm spinner Zulfiqar Babar for the first six of the match and duly brought up his 52nd test fifty but fell soon after, edging Riaz to slip.

Next man in Lahiru Thirimanne (eight) also fell cheaply as Sri Lanka, cruising at 142 for one, slumped to 154 for three before Silva and Mathews batted through the remaining overs without further damage.