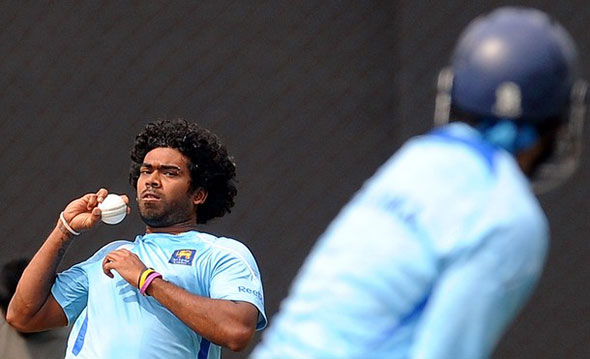 Lasith Malinga delivers the ball during a training session at the R. Premadasa Stadium in Colombo on February 25, 2011. AFP PHOTO/ Lakruwan WANNIARACHCHI.

Kumar Sangakkara has admitted that Sri Lanka are sweating over the fitness of their sharp edge weapon Lasith Malinga. As this is on the eve of their first major crunch game of the 10th World Cup against Pakistan at rebuilt Premadasa Stadium Saturday, the impression is it is not the news they wanted at this stage of the build up to the A Group game.

Malinga was a key weapon in Sri Lanka’s 2007 World Cup campaign where they were losing finalists to Australia in Bridgetown, Barbados. He missed the opening game against Canada, who were overwhelmed by the hosts before a 30,000 crowd at the new venue, Sooriyawewa in the Hambantota region.

Sangakkara did not rule out Malinga entirely from the game, as the hope is he will be ready for the challenge and the refurbished venue in Khettarama.

“His availability depends on how he comes trough the fitness trial,” was the lucid comment from the Sri Lanka captain. “[While] we are hoping he will be ready for the game, we will make a call when we know how he is shaping. If he is not ready, we will not risk him.

“Rather allow him to regain full fitness and be ready for the more important games ahead,” Sangakkara, who kept the media waiting for almost an hour as the Malinga fitness issue was matter of discussion at a team management meeting.

“What it comes down to is that [the] team management and selectors will take a decision whether or not to play him in the early matches or to keep him for the more important games ahead.

“It is a long tournament and it is important the key players are not hampered, or if injured are brought back too soon,” he added.

A bowler with a slingshot type action, Malinga is seen as the one bowler who can provide the cutting edge to the attack of a side hoping to repeat the success of winning the trophy in 1996 and go a step further than 2007 by winning the tournament.

In Malinga’s absence against Canada, the bubbling Thisara Perera, a talented all-rounder bowled with skill and pace to return three for 24 in his seven overs as Sri Lanka brushed aside the out of touch Canadians. He is certainly the bowling all-rounder Sri Lanka need at this level and revelled in the challenge, delivering the ball between 140 and 145 kph on the speed gun, and which as expected troubled the batsmen.

Perera’s partnership with Nuwan Kulasekara (3/21 in six overs), Sri Lanka may have found the idea pairing and will more than likely shape up against Pakistan.

There is some thought as well of bringing the steady left arm variety of Rangana Herath into the squad ahead of Ajantha Mendis. The thought here is how Mendis is no longer a surprise to teams from India and Pakistan. He has been given some brutal hammerings by Indian and Pakistani batsmen and his element to bamboozle such opposition is a concern, especially as his fielding not being the sharpest, and under lights, it has at times been shown up as inadequate.

Sri Lanka are likely to adopt the seven batsmen story again as it has worked well for them in the build up to the tournament and Perera is the ideal middle-order pinch-hitter likely to bat ahead of those such as Angelo Mathews and Chamara Kapugedara.

Waqar Younis, the Pakistan coach, didn’t offer much in the way of comment on the game other than he felt it was the first of the big challenges his side needs to face this series.

“We are taking it a step and a time,” he commented, which gave the impression of “you can make up your own mind about that remark”.

Pakistan are still mulling over their big victory against Kenya in Hambantota and their team management have indicated side is unlikely to show too many changes from that game.

This article first appeared on Trevor Chesterfield’s column on CricketNext.com.