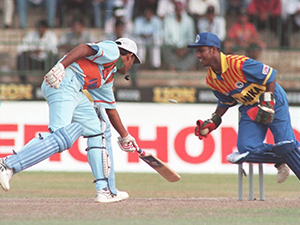 Silva, is a level II qualified cricket coach, and took up coaching just three years ago. He guided his club team, Tamil Union, to the premier limited over title in 2009.

The former St. Anne’s College, Kurunegala cricketer was appointed as the assistant coach for the Wayamba Elevens in 2009. During that season Wayamba won the inter-provincial T20 championship. This year, de Silva toured South Africa with Wayamba for the Champions Trophy T20 tournament as head coach.

De Silva made his first class début for Kurunegala Youth CC in 1991-92. He has also turned out for CCC, BRC and Tamil Union. He played in three Tests and 11 one day internationals for Sri Lanka.

Meanwhile, the outgoing provincial coach, Ajith Ekanayake, has been appointed as the new provincial Manager for North Central Province which covers Kurunegala, Matara, Anuradhapura and Polonnaruwa Districts. Outgoing coach, Ekanayake, a former Maliyadeva College cricketer, is a seasoned campaigner in the local club arena and has done yeoman service as the provincial coach.