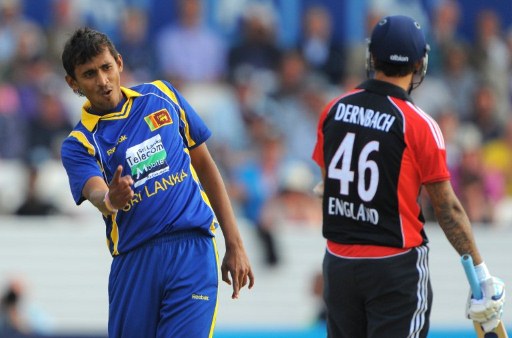 July 8, 2011 (Island Cricket): Fast bowler Suranga Lakmal will not feature in the final ODI of the five-match series against England tomorrow due to an injury.

The 24-year-old, on his first tour of England, suffered a side strain during the fourth ODI against England at Trent Bridge on Wednesday.

"He is out for three or four weeks. The doctors advised him after his scan today," captain Tillakaratne Dilshan told reporters in England.

Dhammika Prasad, who flew to England to replace Sri Lanka’s other injured fast bowler Dilhara Fernando, is expected to take Lakmal’s place in the series decider in Manchester.

The visitors have been plagued with injuries for this tour and have been unable to field their preferred XI in both the Test series and the limited-over leg of the tour.

The final ODI, before Sri Lanka head to Scotland for a triangular series featuring Scotland and Ireland, will be played on July 9 at Old Trafford.