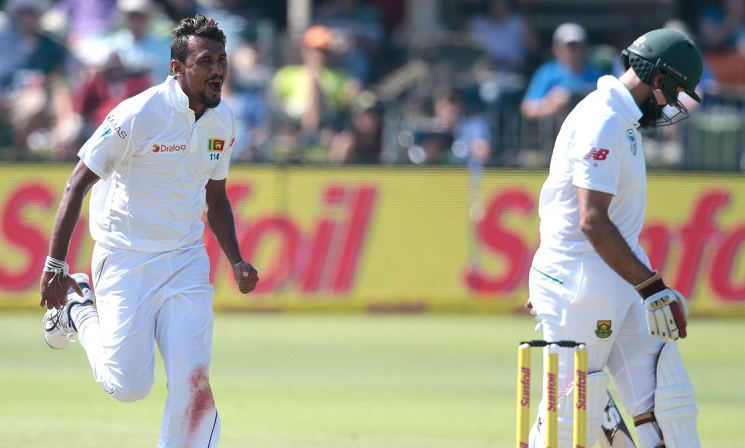 Suranga Lakmal troubled the South Africans with swing and an impecable line and length. © AFP

A strong opening century stand was posted for the host side after they had elected to bat first but Sri Lanka fought back to parity at stumps, leaving South Africa six down for 267 at the close of play on day one in Port Elizabeth.

Suranga Lakmal was the star seamer for the visitors, claiming 4-62, while JP Duminy was top-scorer for the Proteas with an attacking 63.

Despite a green track, Faf du Plessis opted to bat first on the opening day of the series, a move Duminy later labelled "brave". It was one which looked to have paid off, as Sri Lanka's pacemen failed to make full use of the conditions early on.

The Sri Lankan bowlers were either too full or too short to exploit any potential movement off the seam in the first session. As a result, Dean Elgar and Stephen Cook negotiated their way to the lunch interval in an almost chanceless fashion, reaching 92/0 at the break.

With South Africa well on top, it was Lakmal who brought Sri Lanka back into the contest, snaffling the edge of Cook, who was claimed for 59 by a fantastic catch from wicket-keeper Dinesh Chandimal. Shortly thereafter, a better delivery was followed by an even better take from Chandimal, as Elgar (49) too fell caught behind.

South Africa were now 105/2, but where Hashim Amla continued to look scratchy after a poor tour of Australia, Duminy began with a flurry of boundaries. Very little seemed to trouble the seasoned veteran, and he was particularly brutal off the front foot, driving through the covers with ease and the characteristic understated elegance that has marked his career.

Amla, by contrast, looked a shadow of his best self. Edgy and tense, he survived a close LBW appeal early on, and didn't get off the mark for 23 balls. Even on the tour of Australia he was far from the graceful destroyer who had taken apart attacks across the world, but it was nonetheless a shock to see him struggle in home conditions.

In Perth he finally showed glimpses of his old form, making his way to 45 before he edged Australian paceman Josh Hazelwood to Matthew Wade. Here in Cape Town, against a lesser pace attack, there was none of that fluency; he shuffled and fidgeted at the crease — certainly bizarre for a man known as one of the calmest in world cricket.

His tortured stay of 20 from 71 balls was finally ended when Lakmal claimed his outside edge and granted Chandimal his third catch. But, at 178/3, South Africa were still fairly comfortable. Nonetheless, the consistency of Lakmal's line and length after both lunch and tea was excellent. Each of his wickets were hard-earned.

Duminy continued on his merry way, going at more than a run-a-ball and smashing the bad deliveries to the fence. Surprisingly, the paceman who gave him the most trouble was Sri Lanka's skipper Angelo Mathews, who got the ball to talk alarmingly, beating the outside edge and then narrowly missing off-stump in the same over.

His opposite number du Plessis too seemed edgy at times, but eventually settled at the crease. Sri Lanka then turned to their stop-gap in foreign conditions: veteran spinner Rangana Herath. He duly and unsurprisingly delivered, snaring the wicket of a seemingly immovable Duminy. The South African left-hander missed an arm ball and was given out leg-before. Thinking he had edged it, and perhaps too not wanting to waste an excellent start, he reviewed in vain and it was 213/4.

Temba Bavuma was perhaps the only one of the South Africans not to make full use of his start, as he also fell LBW to Herath for just three from 18 balls. At five down for 225, the Proteas would have felt aggrieved at not making full use of Elgar and Cook's wonderful morning session stand.

Skipper du Plessis (37) followed Bavuma to the pavilion, with Lakmal again striking late in the day with the second new ball in hand. The home team's captain was yet another South African batsman who had worked hard to get settled at the crease, only to find himself dismissed when he should have been consolidating on his start.

Going into day two, South Africa will be hoping that Quinton de Kock, their most in-form batsman and comfortable on 25 not out overnight, does not make the same mistake as those before him.

"We are six down, probably two too many there at the end of the day's play, but we have two quality batters out there that can potentially get us over that 350 mark," Duminy said after stumps.

"If we can battle our way to 400, that will stand us in good stead going forward. It's the type of wicket where there is a bit of grass and as the Test goes on it can create some divots in the pitch, which can create some variable bounce on day three and four.

"A big first innings total is crucial in this Test match."