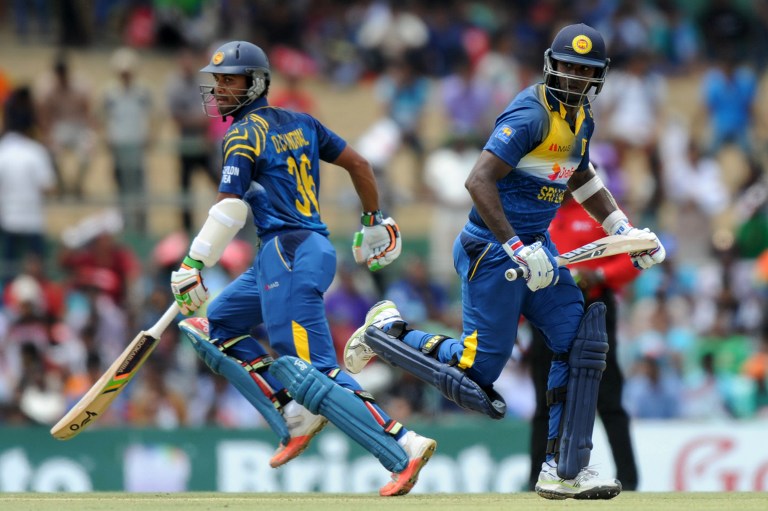 Dinesh Chandimal and Angelo Mathews helped Sri Lanka reach a total of some respectability but it proved insufficient. © AFP

Pakistan beat Sri Lanka by six wickets to go 1-0 up in the five-match series after Mohammad Hafeez claimed his best bowling figures in One-Day Internationals before returning to register his 10th hundred at Dambulla on Saturday.

Part-time off-spinner Hafeez has been under pressure lately after being reported for a suspect bowling action during the Test series in Sri Lanka but proved his worth with figures of 4-41 to restrict the hosts to 255 for eight.

He then made 103 off 95 balls as Pakistan, who won the Test series 2-1, easily chased down the target with almost five overs and six wickets in hand.

The right-handed Hafeez walked out to bat at number three after an opening stand of 47 and looked in sublime form, driving the fast bowlers crisply and hitting the spinners with disdain.

He went past his 50 with a six and hit a boundary off Thisara Perera to cross three-figures, before getting out two balls later in the same over. Hafeez smashed 10 fours and four sixes in total.

Shoaib Malik (55 not out), who added 75 with Hafeez for the fourth wicket, hit a six to complete the victory and also brought up his 32nd half-century with the shot.

Earlier, Sri Lanka got off to a brisk start after Pakistan captain Azhar Ali put them in to bat, but they failed to stitch together meaningful partnerships as all their top five batsmen were out after initially looking set for decent scores.

Hafeez was given the ball as early as the ninth over and struck with his third delivery to dismiss Kusal Perera (26) and break the opening stand of 44.

Veteran opening batsman Tillakaratne Dilshan (38) also fell to Hafeez, who faces a nervous wait to know his fate as a bowler after being reported by match officials for a suspect action during the first Test against Sri Lanka in Galle last month.

The 34-year-old underwent testing and is allowed to continue bowling until the results are known. He will be automatically banned from bowling for 12 months if his action is found to be illegal because he has been reported twice in a two-year period.

Sri Lanka captain Angelo Mathews (38) and Dinesh Chandimal (65 not out) steadied the hosts, who were reduced to 118-4 after Dilshan's dismissal, with a partnership of 82 runs.