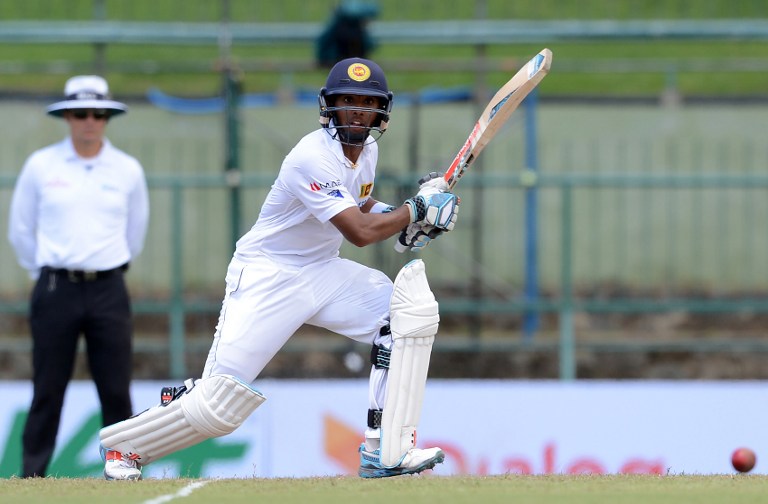 Kusal Mendis's 176 made the difference and allowed Sri Lanka to go to a position of strength from an embarrassing first innings total of 117. © AFP

Mathews said the 21-year-old Mendis "rescued" Sri Lanka from the brink of defeat and led them to their first Test win against Australia since 1999.

Sri Lanka were in a dire position after the Australians bowled them out for just 117 on the opening day of the Test, but managed to roar back into the contest and dismiss Australia midway through the fifth day for a 106-run win, with the constant and overbearing threat of rain threatening to end the game in a draw.

"It's a great victory because after the first day's play we were heading just nowhere,"Mathews said. "Credit should go to Kusal Mendis, who rescued us."

The century against number-one ranked Australia in only his seventh Test appearance was the young batsman's second first-class century. © AFP

Mendis scored his maiden Test century, with a knock of 176 that guided Sri Lanka to a total of 354 in their second innings, before Australia werebowled out for 161, thanks to Rangana Herath's haul of 5-54.

"The wicket was assisting the spinners and Rangana Herath proved his brilliance," added Mathews.

Lakshan Sandakan was also crucial, snaring the best Test match figures ever by a Chinaman slow-bowler on debut, claiming 4-58 in the first innings and 3-49 in the second for match figures of 7-107.

"Sandakan is a brilliant find for us," said Mathews of the debutant. "We knew that the wicket was going to take turn and Sandakan responded brilliantly."

Mathews was elated to win against Australia after a long drought against their arch rivals in the longest form of the game, as he recalled just how significant it was to beat the number-one-ranked Test team.

"It's pleasing to beat them after 17 long years," he said. "This is a very strong Australian team as well and they are ranked number-one. I was a little kid when we won the last time."

Sri Lankan president Maithripala Sirisena gave his "special congratulations" to Mendis upon the achievement of the victory in the first Test of the series.

Australian captain Steve Smith was critical of his team's batting, but praised Mendis and was pleased with the partnership between Steve O'Keefe and wicketkeeper Peter Nevill, who kept Sri Lanka at bay for nearly 30 overs on day five.

"Tough week, credit to Sri Lanka the way they played," Steve said. "We let ourselves down with the bat, we weren't disciplined with the bat.

"Credit to Kusal, his 176 turned the game. Anything above 260 on this wicket was always going to be difficult.

"Pretty proud about the way Peter Nevill and Steve O'Keefe fought hard in the end. We were trying to stick around as much as possible and force a draw, but that wasn't to be."

The second Test of the three-match series begins in Galle on August 4.