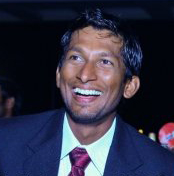 Jeewan Mendis, 26, capped a prolific 2009/10 domestic season by scoring a unique double, being named ‘Player of the Tournament’ of both the major domestic first-class tournaments. Demonstrating his versatility, Mend is was named Player of the three-day Premier League Tournament as well as Player of the Premier One Day Tournament, shining with both bat and ball in both competitions.

Mendis, who made his first-class debut in 2000/01 as a highly promising teenager, has nevertheless enjoyed few opportunities at representative level even for the national ‘A’ team, but his eye-catching performances this season, culminating in these prestigious awards, could see a change in his fortunes.

That is certainly the hope of Mendis who was understandably elated with the awards. Reacting to the good news, Mendis said: “I’ve been around for a long time, but I’m still young and my ambition is to play for Sri Lanka.” He added: “The yard-stick for getting opportunities at higher levels in Sri Lanka is by a player’s performances in the two Premier Tournaments and this season I have been named the best in both. This gives me hope that I will gain more opportunities now and I will work even harder to build on the success that I enjoyed this season.”

Emphasizing ‘opportunities’, Mendis attributed his success this season to his move to the Tamil Union Club, where he had greater freedom to express himself and display his talents. Something he claims he was unable to fully accomplish at his previous club, the Sinhalese Sports Club, understandably, due to their extensive depth of talent.

Mendis, predominantly reputed as a batsman since his early days, has nevertheless worked on his bowling in recent years. His wily leg spin saw him capture 31 wickets in the league tournament at an average of 25, and he was the second highest wicket-taker in the one day tournament with 23 wickets at 15, helping the Tamil Union to claim the one day championship in the process. His batting was no less impressive, scoring 543 runs at an average of 45 in the league tournament and 345 runs at 38 in the one day tournament.