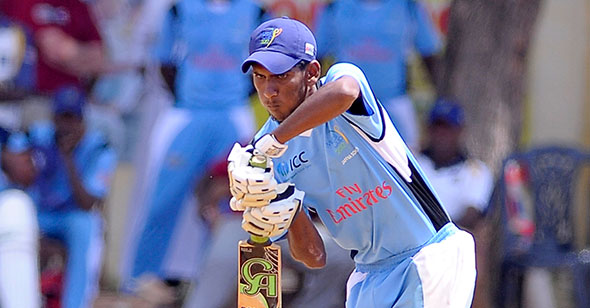 Jaffna Combined Schools continued their dream run in the tournament with a compelling performance against Maliyadeva College to secure their passage to the Murali Harmony Cup finals.

The talented team, who had earlier shocked Trinity College, dominated the match as they piled up 179 for 7 after electing to bat first.

Man of the Match Gaster Tuder, who is also a fine wicket-keeper, was the cornerstone of the innings with a classy 85.

Hard-hitting Edward Edin, who is also a Northern Province sprint champion, continued his fine form with an entertaining 37 full of powerful strokes.

In reply Maliyadeva were never able to challenge the Jaffna total as Tamil Union fast bowler JP Erick took 3 for 11 and spinner B. Clington claimed 2 for 9.

The Kurunegala school were bowled out for 88 in 18.5 overs to give Jaffna a 91 run victory.

Jaffna will now play St. Peter’s College in the finals of the tournament at the IODR Oval in Oddusuddan on Wednesday.

The Murali Harmony Cup is a 20-team reconciliation tournament staged to promote community-building and friendship in post-war Sri Lanka.

The five-day tournament has been jointly organised by Muttiah Muralidaran’s charity the Foundation of Goodness, travel company Red Dot Tours, the International Cricket Council and the Sri Lanka Army.