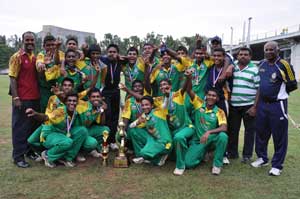 October 06, 2010 (Island Cricket): St Peter’s College emerged the under-17, division one, inter-school cricket champions when they defeated Trinity College by seven wickets in the final played at the Colombo Cricket Club Ground yesterday.

Trinity skipper Niroshan Dickwella winning the toss and electing to bat first made a modest score of 170 with Niroshan making a top score of 41.

The Peterites in their run chase were given a sound start by openers Shehan Fernando and Sashin Fernando who together added 84 runs in even time. Shehan though being the first to be out made a quickfire 51 in just 48 balls which had four boundaries and two sixes.

Unbeaten knocks of 27 and 24 from Jason Buultjens and Lahiru Milantha paved the way for an easy win as the Peterites reached the target with a towering six hit by Lahiru in the last ball of the 35th over.