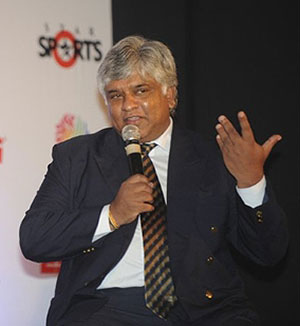 August 24, 2011 (Island Cricket): Following India’s embarrassing 4-0 rout at the hands of England on Monday at The Oval, former Sri Lanka captain Arjuna Ranatunga has urged the Board of Control for Cricket in India (BCCI) to stop degrading Test cricket.

After winning their first World Cup this year since 1983, all of India’s leading cricketers went straight into the IPL tournament. Several of their leading cricketers opted to miss the West Indies tour that followed soon after. Some Indian cricketers even delayed surgery after the World Cup, not wanting to miss the cash-rich IPL and after arriving in England half fit, they broke down halfway through the tour.

Fast bowler Zaheer Khan had to limp off during the first Test at Lord’s, while other players such as Virender Sehwag, Harbhajan Singh, Yuvraj Singh, Gautam Gambhir and Praveen Kumar were also hit by injuries.

"It’s hard to believe that such a talented side failed to compete, isn’t it," Ranatunga queried.

"It all comes down to preparation. When you are world’s number one, you should have pride to protect that number one tag and you should do all within your reach to sustain that.

"India’s preparation ahead of the tour suggested that they weren’t interested anymore. They seem to have got carried away with their IPL. It seems like they don’t need outside influences to harm Indian cricket – the BCCI is doing it expertly," Ranatunga said.

"Rahul Dravid was outstanding during the Test series and the reason was that he was well prepared," Ranatunga added.

"The same thing happened when Sri Lanka toured England. Prasanna Jayawardene didn’t play the IPL, he prepared for the Test series, played both warm-up games in England and was the Man of the Series. The same goes with guys like Tharanga Paranavithana, who I thought did fairly well in England opening the batting.

"For a batsman of the quality of Kumar Sangakkara, it took nearly a month to adjust to conditions before he scored a hundred on that tour. A player like Mahela Jayawardene with such quality couldn’t score a hundred in the Tests.

"To succeed in England, preparation is extremely vital and to my surprise India ignored it."

"India is extremely vital to sustain Test cricket. It is fine for players to earn money through the IPL, but players should know their priorities," the former Sri Lankan captain further added.

"It is when you lose your priorities that wheels start coming off. The Sri Lankan team going to England in four different batches for a Test series was simply disgusting and it is one of the most disgraceful things I have seen in the history of our cricket. All this, thanks to the IPL."

When Ranatunga was head of Sri Lanka Cricket in 2008, a request by England to replace Zimbabwe in a two-match Test series was turned down by the players as it was clashing with the IPL. Sadly, it was the very players Ranatunga had nurtured as Sri Lanka’s captain who teamed up with a player agent and a minister to carry out an ugly revolt against him.

It is even suggested that Ranatunga’s term as the head of the interim committee was put to an end on a request by some officials of the BCCI as he was constantly crossing the path of IPL.