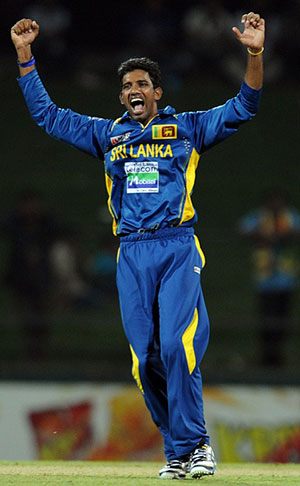 New Zealand are preparing to face a spin barrage from Sri Lanka when the two sides meet in the Champions Trophy in Cardiff on Sunday.

New Zealand go into the tournament after a morale-boosting 2-1 one-day series win over hosts England, but Brendon McCullum’s side know Sri Lanka will throw up new challenges.

"We could conceivably be facing 30-35 overs of spin," Black Caps coach Mike Hesson said ahead of the group A game. "We need to be proactive against it."

With sling-arm fast bowler Lasith Malinga and steady seamer Nuwan Kulasekara also in the ranks, Sri Lanka have their options covered for what are expected to be good batting conditions in Cardiff.

India and South Africa played a high-scoring match at the same venue on Thursday, with the Proteas making 305 in reply to a commanding 331-7 by Mahendra Singh Dhoni’s World Cup champions.

With Australia and England the other two teams in their group, both New Zealand and Sri Lanka know a victory in the first match assumes greater significance.

Two teams from each group will advance to the semi-finals, making it almost mandatory to win at least two of the three games to make the grade.

"It’s as close to a knock-out competition as you can get," Hesson said. "We are certainly not thinking two weeks ahead."

Sri Lankan captain Angelo Mathews, leading his country for the first time in a major competition, agreed that winning the first fixture was important.

"You would want to win every game you play, but in a format like this it is important to get a good start," he said.

They have not enjoyed a good run in the Champions Trophy, failing to make the finals of the last three editions, even though they were joint-winners with India at home in Colombo 2002.

Sri Lanka will be encouraged by the fact they have won 10 of their last 11 completed 50-over games against New Zealand, including the last six in a row.

Sri Lanka’s batting will once again revolve around three seasoned former captains, Mahela Jayawardene, Kumar Sangakkara and Dilshan, who must all fire to protect the fragile lower order.

Dilshan will have as his opening partner an exciting 22-year-old left-hander, Kusal Perera, who averages 55.33 in six one-day innings so far with a strike-rate of 84.26.

Perera plundered the Indian attack for seven fours and three sixes during his innings of 82 off 94 balls in a warm-up match in Birmingham on June 1, lifting his side to 333-5 in 50 overs.

But Sri Lanka still lost that game with one over to spare as India rode Dinesh Karthik’s unbeaten 106 and Virat Kohli’s 144 to a five-wicket victory.