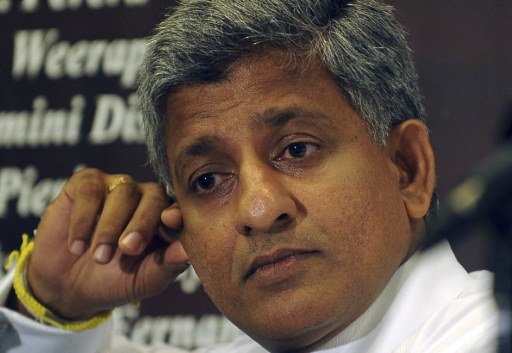 Sri Lanka’s opposition to the Big Three proposal and their decision to abstain from voting for the proposal in the recent International Cricket Council (ICC) board meeting in Singapore has left Sri Lanka Cricket (SLC) in a parlous state, with the Board of Control for Cricket in India (BCCI) choosing to isolate its neighbour.

"The BCCI has also sealed bilateral agreements with seven of the nine nations (minus Pakistan and Sri Lanka), including Zimbabwe," the paper added.

The financially-struggling SLC, as well as other boards, rely heavily on bilateral tours against India for the massive financial returns that come with playing a series against them.

The widely-criticised Big Three proposal — radical changes to cricket’s governance and financial structure proposed by India, England and Australia — will see cricket ruled by three nations to their financial benefit.

Cricket South Africa (CSA) held the key vote heading into Saturday’s meeting, but despite their initial opposition to the revamp, they voted in favour.

"It is learnt that the South African board was convinced to go along with the changes mooted after the BCCI had assured them of a few lucrative tour arrangements, including a proposed full tour by India," the Indian Express reported.

"The CSA had earlier described the position paper as ‘fundamentally flawed’, but BCCI president [Narayanaswami] Srinivasan had a lengthy discussion with CSA chief Chris Nenzani after which things changed," the report added.

Other Test-playing nations and Associates have been won over with concessions.

The Associates now have a more clearly defined path to gain Test status, while Bangladesh’s fear of being relegated and losing their Test status has been allayed, which largely helped win their vote. Bangladesh have also been promised their first tour of India.

New Zealand meanwhile chose short-term financial security and maintaining a good relationship with India over all else.

"India has a lot of control under the new arrangement, but it’s not a lot more than right now," New Zealand Cricket’s Martin Snedden said. "They already have significant influence — that’s just the way it is. Stable future tours by India are our most valuable revenue source."

Srinivasan, the BCCI president, will now be appointed as chairman of the ICC for a two-year period starting in July, with Cricket Australia’s chairman Wally Edwards heading the newly-formed executive committee in control of world cricket. Giles Clarke from the England and Wales Cricket Board will retain his position as the chairman of the finance and commercial affairs committee.

"Full Members will gain greater financial recognition based on the contribution they have made to the game, particularly in terms of finance, their ICC history and their on-field performances in the three formats," the ICC said in a statement announcing its new financial model.

"This decision is the outcome of a negotiation between Members that has been required to provide long-term certainty of participation of all Members in both ICC events and bilateral series against other Members. Without that certainty, the rights for ICC events, which are to be taken to market this year, would have been significantly impacted and, by extension, so would the financial support that has driven the growth of cricket around the world.

"The structure of the model will ensure that none of the Full Members will be worse off than they are at present and — if forecasts of revenue generation prove to be correct — all will be significantly better off. The agreement of the model has been an important part of a wider negotiation that will now provide long-term certainty of participation in ICC events by all of the Full Member teams."

The Federation of International Cricketers’ Associations (FICA) said last month that it was "extremely concerned about the future of international cricket" after reviewing a leaked draft proposal on the revamp.

"Once again we are seeing the result of the poor governance structure and practices of the ICC, on this occasion led by three of its Board members," FICA executive chairman Paul Marsh said in a statement. "This proposal is 180 degrees from the structure proposed in the ICC’s own independently commissioned governance review (Woolf Report). It is also clearly unconstitutional."

The UK’s Daily Telegraph reported this week that the revamp "has been condemned by Transparency International and [former chief justice of England] Lord Woolf."

"I don’t see how if we had this to consider we could see it as anything but a retrograde step. It is giving extraordinary powers to a small triumvirate of three people, and everybody else has got no power to say anything or do anything," Lord Woolf told the Telegraph.

"It’s an undisputed fact that they [India] are the biggest generators of money and that they can say that should be taken into account, but how it should be taken into account is a matter of judgment," he added. "That’s why this wants to be looked at. It may seem very attractive to the three countries involved — and they are undoubtedly the biggest countries in the cricketing world. All the more important I would say are the interests of the smaller countries.

"What I thought was particularly significant in this is that the executive committee — whether it’s three or five people — are a filter against any recommendations for reform in the future. They’ve got a stranglehold on it."

According to ICC president Alan Isaac Sri Lanka and Pakistan, the only two boards to have refrained from voting, "have pledged to further discuss the issues with an aim to reaching unanimous approval over the coming weeks."

Sri Lanka will have no choice but to make a shamefaced volte-face on their stance on the revamp, which the SLC president Jayantha Dharmadasa termed "illegal" recently in a letter to the ICC, but they may have already drawn India’s ire and it may all be too late.

Nishantha Ranatunga the secretary of SLC, who attended the crucial board meeting instead of Dharmadasa, told Sri Lanka’s Sunday Times that SLC is "ready for any eventuality" if there were repercussions to their stance on the revamp.

"No country should take our stand personally," Ranatunga said. "We have taken this stand on a certain principle. They are mature people and they should understand it. Yet, there may be certain actions taken against the three countries that opposed the proposal and we would have to amend our strategies accordingly."