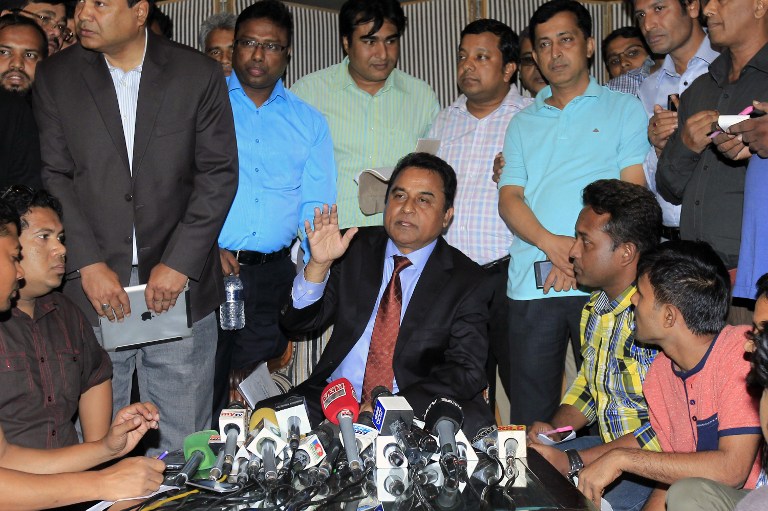 The International Cricket Council (ICC) was left red-faced on Wednesday when its president Mustafa Kamal resigned claiming he was snubbed at the presentation ceremony after Sunday's World Cup final in Melbourne.

Kamal, as the titular head of the governing body, was expected to present the trophy but ICC chairman Narayanaswami Srinivasan awarded it to the victorious Australian side at the Melbourne Cricket Ground.

Many believe it was a price Kamal paid for his outburst against a controversial umpiring decision that went against his country Bangladesh in their World Cup quarter-final defeat by India, the country Srinivasan hails from.

Kamal has been quoted in the local media flaying Srinivasan and the former Bangladesh Cricket Board chief, on his return from Australia, said "people with ugly mindset" had no business running the ICC.

"I was supposed to present the trophy to the winners after the Melbourne final. But I couldn't do that," he told reporters at the Dhaka airport on his arrival from Australia.

"I'm again requesting — these type of people should be away from cricket, otherwise cricket will be spoiled, cricket will not move forward," Kamal said.

"My earnest request to ICC is to revisit those things. I'm sure people will find out why I have resigned and they will unearth the truth — who are these people, what are they doing and how they are running ICC," he added.

The governing body confirmed Kamal's departure, saying that his resignation letter stated he was leaving "on personal grounds" and that "he had no complaints to make against anyone".

The ICC had criticised Kamal for his outburst last month against a controversial no-ball decision in the World Cup quarter-final match.

India opener Rohit Sharma was caught in the deep and umpire Aleem Dar deemed it was an above waist-height no-ball though replays contradicted his opinion.

After India won the match, Kamal questioned the motive of the umpires and demanded the governing body looked into the dismissal.

"Any suggestion that the match officials had 'an agenda' or did anything other than perform to the best of their ability are baseless and are refuted in the strongest possible terms," Richardson had said.