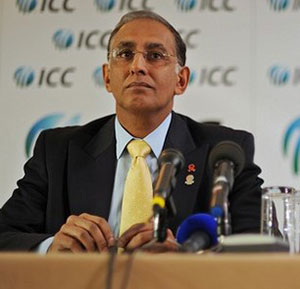 The International Cricket Council, meeting in Hong Kong, said it had made the decision to uphold "the important principle of free elections and the independence" of the sport.

"It was agreed that all member boards must implement the provisions before annual conference June 2012 and a further 12 months — to June 2013 — would be allowed before any sanctions be considered," the ICC said in a statement.

The reform, which allows the ICC to suspend a member country in the event of government interference in the running of a national cricket board, will be hugely controversial in Pakistan, where the president is the cricket board’s patron. Sri Lanka and Bangladesh will also be hit by the change.

The Pakistan Cricket Board (PCB) could not immediately be reached for comment.

Chairman Ijaz Butt has been criticised by former players, politicians and media for being a political appointee of the ruling Pakistan People’s Party.

The PCB has already sent a legal notice to the ICC on the amendment and has threatened legal action if the constitution is changed.

The decision was taken at a meeting of the ICC’s full council after four days of talks between the chief executives’ committee and executive board at Hong Kong hotels.

ICC chief executive Haroon Lorgat said the reform was needed to bring cricket into line with standards practised in other global sports.

Football’s governing body FIFA can suspend national associations if they are tainted by government interference. Iraq is only just emerging from two years in the footballing wilderness after running afoul of the FIFA rules.

"This is a significant step towards achieving best practice and together with the independent governance review, I am excited by the commitment of the ICC to introduce best possible corporate governance," Lorgat said.

The South African said the ICC had "sensed over a while" that government agencies were interfering in the affairs of some cricket boards, but did not name those nations.

"I do believe it is a step in the right direction, and we will work with those boards that need to unravel themselves from government departments however they may be structured," he said.

But Lorgat added that it was a "complex topic", and said this was why boards had been given another 12 months to get their affairs into order.

"This is a good and constructive move by the ICC and I think Pakistan, India, Sri Lanka and Bangladesh boards stand to gain the most from it because these are the countries where government interference in cricket affairs is obvious," Mani, the ICC’s president from 2003 to 06, was quoted as saying.