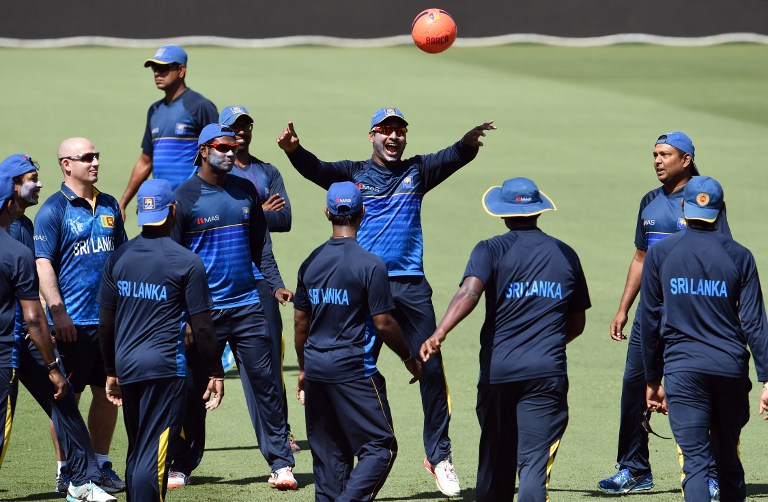 Sri Lankan players were in good spirits ahead of their crunch game against Australia. © AFP PHOTO

SYDNEY (Reuters) – Sri Lanka are slowly coming to the boil at the World Cup after a poor warm-up tour of New Zealand and are aiming to peak for the knockout stages, skipper Angelo Mathews said on Saturday.

Three victories in their first four matches, including a nine-wicket thumping of England last time out, mean the Sri Lankans will approach Sunday's crunch Pool A match against co-hosts Australia full of confidence.

That was not the case at the start of the campaign when, having lost a seven-match series against New Zealand 4-2, they were beaten by 98 runs by the co-hosts in the tournament opener.

"Coming into the World Cup, no one really gave us a chance, we had a pretty poor series against New Zealand and we weren't playing good cricket," Mathews told a news conference at the Sydney Cricket Ground (SCG).

"We are picking ourselves up and I think we are peaking at the right time. It's going to be an even contest, from the quarter-finals onwards, whoever plays the best cricket will go on to win the World Cup."

Sunday's match is considered a crunch encounter because it is likely to determine which of the two teams finishes second in Pool A behind New Zealand and avoids India or South Africa in the quarter-finals.

Although Sri Lanka have not beaten Australia in five attempts at a World Cup since the 1996 final, they have won four of their last six matches against them at the SCG.

"Recently when we've played against Australia, we beat them in England and we beat them here, so we have the capacity, we have the skill, it's just they are a very hard team to beat," he said.

"But we've just got to flush out the past and go out an enjoy ourselves tomorrow."

With leg-spin bowling always traditionally a factor at the SCG, Mathews said Seekkuge Prasanna could be drafted straight into the team a day after being approved as an injury replacement.

Prasanna technically replaced batsman Dimuth Karunaratne, who was sent home after breaking a bone in his hand, but in reality would be standing in for Rangana Herath, who has been sidelined for a week after cutting his spinning finger.

"We still haven't had a look at the wicket today, yesterday was completely different to what we saw on the first day," Mathews said.

"We still haven't decided on that, but he has a good chance."