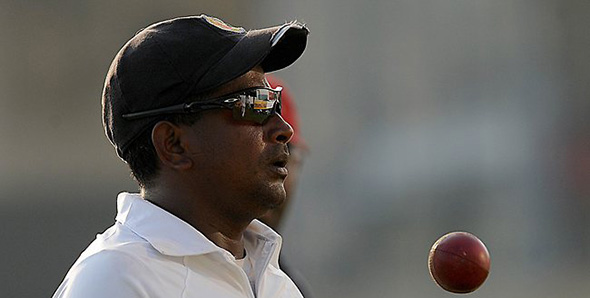 Rangana Herath loves Galle, the venue he made his Test debut at. © AFP

GALLE, Sri Lanka — Rangana Herath bagged a five-wicket haul to put Sri Lanka in a strong position on the opening day of the first Test against New Zealand in Galle on Saturday.

The left-arm spinner finished with 5-65, his 11th haul of five or more wickets in a Test innings, as Sri Lanka dismissed New Zealand for 221 in the first innings before reaching 9-1 in reply at stumps.

Nightwatchman Suraj Randiv was unbeaten on three while opener Tharanga Paranavitana had yet to open his account. Debutant opener Dimuth Karunaratne was trapped leg-before by fast bowler Tim Southee for no score.

"I made my Test debut in Galle and I love this place as most of the time I have played here I have done well. I have had a great time at this ground in the last two or three years," said Herath.

"The ball is going to turn on the fourth and fifth days and we need to get a lot of runs. Our plan should be to bat tomorrow and even day after and get as many runs as possible."

Sri Lankan paceman Shaminda Eranga, playing only his second Test, was the other bowler to impress as he took two wickets off three balls in a lively opening spell to eventually finish with 3-51.

New Zealand squandered the advantage of batting first on a good wicket at the Galle International Stadium after winning the toss as they faltered against pace in the morning and then against spin.

Opener Brendon McCullum (68) and middle-order batsman Daniel Flynn (53) were the only batsmen to apply themselves well on a slow turning track before both fell to Herath in the afternoon session.

"It was not the batting performance we were after. At Galle when you win the toss and bat first, you’re after a total in excess of 400. We weren’t able to do that today," said McCullum.

"I thought the pitch was good. It turned a lot more than we probably anticipated it would on day one of a Test match, but that’s what you expect when you come over to the sub-continent. It was slow turn."

New Zealand were struggling at 40-3 following Eranga’s double-strike in the morning before McCullum and left-handed Flynn steadied the innings with a 90-run stand for the fourth wicket.

McCullum played some aggressive shots in the afternoon, hitting off-spinner Suraj Randiv and Herath for sixes. He fell immediately after hitting his second six, bowled by Herath.

Herath got his third wicket when he had Flynn caught behind after the batsman had hit seven fours in his 152-ball knock.

Sri Lanka’s fast bowlers did the early damage when they took three wickets in the first session, with Eranga striking twice and Nuwan Kulasekara once.

Eranga had opener Martin Guptill (11) and Kane Williamson caught in the slips, while Kulasekara bowled skipper Ross Taylor (nine) in his fifth over.