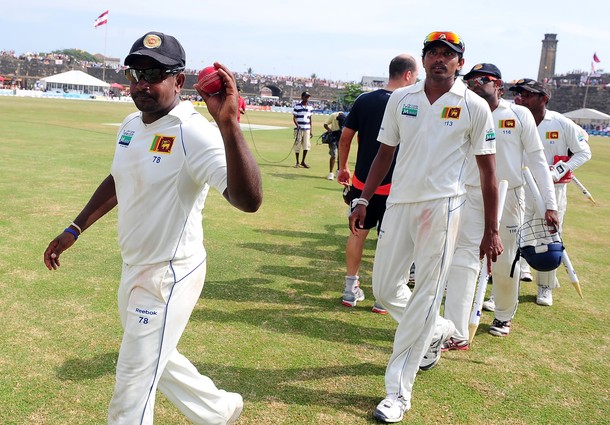 Rangana Herath leads the team off the field at Galle after spinning Sri Lanka to victory. © AFP/LAKRUWAN WANNIARACHCHI

Sri Lanka’s new generation of bowlers are determined to help their side come out of Muttiah Muralitharan’s shadows, according to left-arm spinner Rangana Herath.

Herath, the fifth Sri Lankan bowler to get 10 or more wickets in a Test match, was adjudged the Man of the Match after he claimed 12 English wickets in the first Test in Galle.

“I don’t think I am filling in Murali’s shoes; I don’t think we will able to replace Murali, he is irreplaceable. But we, as a new bowling unit, are trying to contribute our best to the success of the team,” Herath, who is very happy about his personal best and team’s success, told BBC Sinhala.

"I got 12 wickets for the first time in my career, and it was really nice to be able to contribute to the defeat of the world’s No1 ranking team.”

Together with England’s Graeme Swann, the spinners were responsible for most of the wickets to have fallen from Monday to Thursday at the Galle International Stadium.

“I think Suraj bowled really well in the Galle Test. In terms of overs, I bowled many more overs than Randiv and one can’t expect two bowlers to perform really well in one match,” Herath said.

Herath earned a career-best seventh place in the ICC Test rankings for bowlers after taking 6-74 and 6-97 in Galle.

“This is the second time I was ranked seventh in ICC Rankings. First, I reached that position after the Durban match in South Africa,” he said.

“But my hope is to improve my bowling and rise above the current rank.”

“It is very nice for the team’s captain to encourage players like that,” Herath said.

“I got a lot of confidence from it, and the most important factor for any player to perform well is confidence so it is really nice.”

This article first appeared on the BBC Sinhala service under the headline ‘Murali irreplaceable – Rangana Herath’. It is republished here with permission from the author.