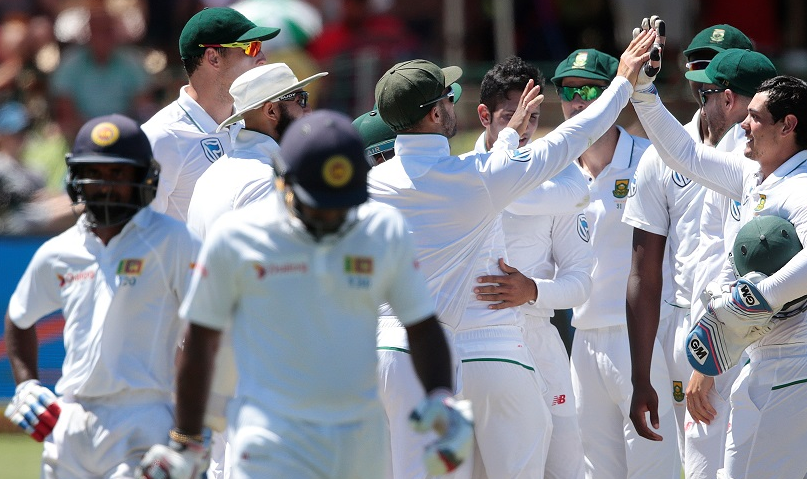 Kusal Perera once again failed to make use of the opportunity to bat at No. 3, throwing his wicket away to a rash shot early in his innings. © AFP

After being set an imposing 488 for victory, Sri Lanka managed to score 240 from 83 overs on day four. A string of unnecessary and rash dismissals, however, has left them five wickets down at stumps. Despite an improvement in batting conditions, it will nonetheless be a difficult challenge for Dhananjaya de Silva and his captain Angelo Mathews (58) to negotiate a tough final day against a world-class South African bowling unit.

South Africa started the day on an aggressive note, with wicketkeeper Quinton de Kock and Proteas captain Faf du Plessis adding 55 to their overnight score of 351/5 before du Plessis declared to set Sri Lanka a target of 488. The declaration came after Rangana Herath had struck de Kock on the pad, and after a review, the original appeal for LBW was upheld. du Plessis followed de Kock to the pavilion, and his intention was clear.

So was the intention of the Sri Lankan opening pair, Dimuth Karunaratne and Kaushal Silva, who seemed strong in their resolve to negotiate the new ball after falling cheaply in the first innings. It took some time for the partnership to settle, but thereafter, Karunaratne was particularly harsh on anything short and wide or on his pads, with his trademark on-drives and cut shots coming out in full flow.

Karunaratne was far more watchful of not flirting with swinging deliveries outside or on a fifth-stump line. Silva too was cautious, playing with soft hands whenever the edge was eventually found. The pair safely navigated their way to the lunch interval, with the score at 27/0.

The best of the South African bowlers prior to lunch was Kagiso Rabada, who after being wayward in their first innings, was far more accurate in the second. Rabada was able to extract steeping bounce and serious pace from an improving pitch.

After the break, both of Sri Lanka's openers came out of their shell slightly, with Silva striking a few crisp drives down the ground and Karunaratne whipping Vernon Philander off his legs for four. Still, South Africa's pacemen were able to stick to consistent lines and put pressure on the pair with a low economy rate.

But the manner in which the partnership was broken will certainly concern Sri Lankan fans. A moment of slight hesitation from Karunaratne in taking a single led to his demise as he was narrowly run out for 43. Karunaratne later explained it was a small strain that had caused him to pause and said it was not Silva at fault.

"It was all my mistake I think," Karunaratne said of his run out. "Kaushal and I both play for the SSC, so we bat together and there's no misunderstanding, but I tweaked a muscle playing a reverse sweep earlier, and that was playing on my mind a bit. I stopped and tried to start again and that's why I was run out."

Even more disappointing for the Sri Lankans was the manner in which Kusal Perera fell shortly thereafter for just six. After being out to a rash cut shot in the first innings, he did the same against Keshav Maharaj. The spinner made just enough contact to take the edge of Perera's bat on the way through to keeper de Kock. Maharaj was delighted and could clearly see the importance of removing a man with a reputation for fast scoring so early in his innings. At 93/2, it seemed as though some of Sri Lanka's good work would be undone.

Silva and Kusal Mendis played for time rather than runs and got to the tea break, but it didn't grant them much of a reprieve, as Silva fell just two balls after the adjournment. His LBW dismissal to a superb Rabada delivery was perhaps the only one throughout the day that could not be labelled as of his own doing, but nonetheless he was on his way for 37.

Mathews was attacking upon his arrival at the crease, and added 75 with an increasingly confident Mendis. Mathews used his feet convincingly against Maharaj and back cut Rabada impressively for four. Mendis (58) was finally dismissed not long before stumps, with Rabada again the one to snare the breakthrough. Mendis bizarrely attempted to play the 'periscope' shot, trying to glide a bouncer over the top of wicket-keeper de Kock, but only succeeding in granting him a simple catch.

Sri Lankan vice-captain Dinesh Chandimal was the last wicket to fall for the day. He was caught by Rabada at mid-on while attempting to smash Maharaj down the ground. Karunaratne later told reporters that Chandimal will feel contrite about his choice of shot.

"Chandimal will be disappointed but he will learn," Karunaratne said. "These are mistakes and we need to play better cricket."

Sri Lanka's ability to play "better cricket" will largely hinge on the partnership of de Silva and Mathews. Sri Lankan captain Mathews (not out on 58) in particular will need to bat for a long period and probably remain unbeaten, if he is to see his side over the line as skipper.