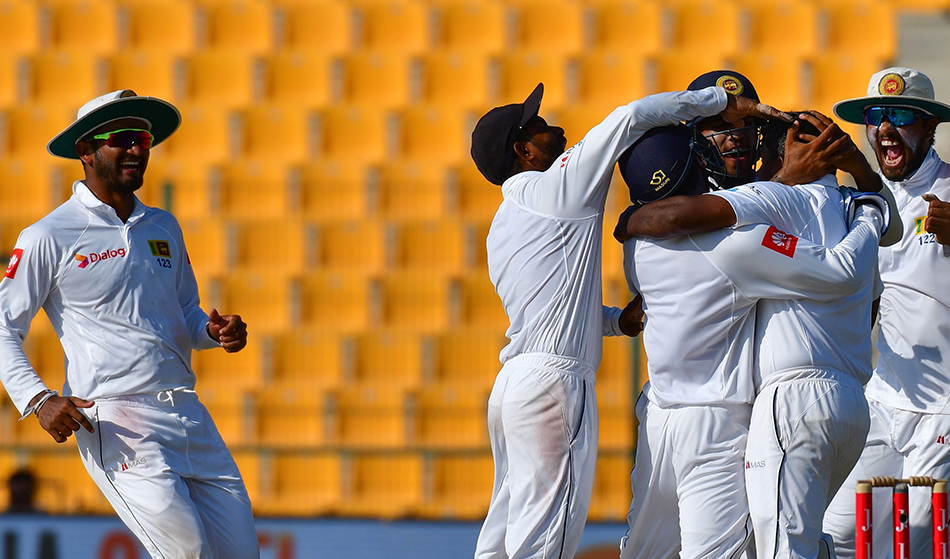 After a disappointing few months, Sri Lanka reversed their losing streak with a remarkable win. © AFP

Rangana Herath became the second Sri Lankan to bag 400 career Test wickets, reaching the milestone with a six-wicket haul that steered his side to a thrilling 21-run win over Pakistan in the first Test in Abu Dhabi.

The veteran left-arm spinner took 6-43 (11-136 in the match) to scupper Pakistan, who were set a modest 136-run target, for just 114 on a weary fifth day Sheikh Zayed Stadium pitch.

The victory was achieved when Herath trapped last man Mohammad Abbas leg before wicket for a duck to give Sri Lanka a 1-0 lead in the two-match series.

Herath, a long-time nemesis of Pakistan, also completed 100 wickets in 20 Tests against them, during an innings in which only debutant Haris Sohail fought with some resolve for his 34 runs.

Herath became the 14th bowler in all Test cricket and the fifth spinner behind his fellow countryman Muttiah Muralitharan, Australia's Shane Warne and Indian duo Anil Kumble and Harbhajan Singh to reach the 400-wicket milestone.

The 136 set Pakistan was Sri Lanka's lowest defended target, improving on the 168 they set Pakistan in the Galle Test in 2009.

It was also a first defeat for Pakistan in Abu Dhabi in 10 Tests.

Earlier, leg-spinner Yasir Shah took 5-51 — his 32nd five-wicket haul in Tests — to dismiss Sri Lanka for 138 in their second innings.

Niroshan Dickwella ensured Sri Lanka had something to defend with a pugnacious 40.

The second Test, played as a day-night match, starts in Dubai on Friday.