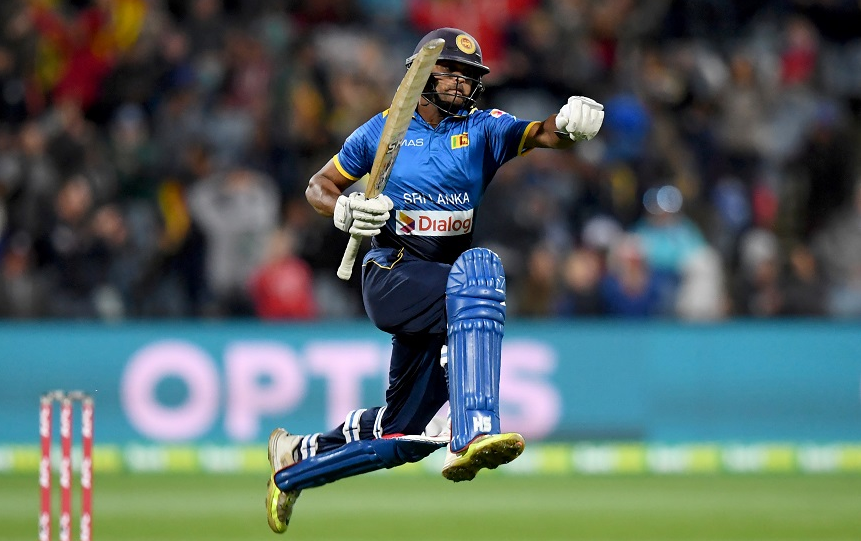 Asela Gunaratne's brilliance saw Sri Lanka take an unassailable 2-0 lead in the series and they now boast of a 5-0 victory record in T20Is in Australia. © AFP

With Sri Lanka needing 59 from five overs and then 36 from two, the first-ever T20 International at Geelong's Kardinya Park on Sunday seemed all but lost for the tourists. Following on from his half-century in the previous game, Asela Gunaratne however smashed an unbeaten 84 to grant Sri Lanka another nail-biting last-ball win and an unassailable 2-0 lead in the three-match series.

Chasing 173 for victory, Gunaratne struck three-consecutive sixes off the hitherto economical Moises Henriques and then struck a dramatic last ball four off Andrew Tye to seal the victory in style.

Sri Lanka managed to claim all 10 Australian wickets but were still the victim of their own poor fielding, as they again conceded an above-par score.

Upul Tharanga won the toss and once more chose to field first. Aaron Finch and Michael Klinger began as well as they had in Melbourne, adding 18 in a little more than two overs, on a deck that was nipping around. Vikum Sanjaya then claimed Finch (12) with an excellent return catch.

Klinger and the aggressive Ben Dunk added a rapid-fire 45 to put Sri Lanka under pressure before Gunaratne had Dunk bowled for 32 from only 14 balls.

With his partner's departure, Klinger upped the ante and then the wheels fell off for Sri Lanka when Chamara Kapugedera shelled a relatively easy chance on the boundary off top-scorer Moises Henriques.

Milinda Siriwardana redeemed the fielding effort with a stunning low catch down at long-on to remove pinch hitter Ashton Turner for seven. Nuwan Kulasekara and Lasith Malinga then chose offense as the best form of defence, claiming a cluster of bowled and LBWs to restrict Australia's total to an above-par but not improbable target of 173.

Henriques was the star with the bat for the hosts, with 56 not out from only 37 balls, including two fours and two sixes.

After a poor start, Kulasekara finished with three wickets in four balls to claim 4-31, while Malinga took 2-31 in only his second game since his return to the national side after a lengthy injury-related absence.

Tharanga fell cheaply for the second game in a row, caught by Jhye Richardson off Turner for just four. Tharanga's opening partner Dickwella was unable to repeat his heroics from the previous game, when he was caught behind off James Faulkner, with Kusal Mendis too falling much the same way to Richardson.

At 27/3, it did not look good for Sri Lanka. It got a lot worse when Siriwardana followed Dilshan Munaweera (10) to the pavilion for a first-ball duck.

Sri Lanka were now 40/5 and in desperate need of a rescuing partnership. Kapugedera and Gunaratne provided just that, but the required-rate continued to climb during a lengthy consolidation period.

Kapudegera in particular struggled to lay bat on ball against the slower deliveries, and when he was finally undone by Pat Cummins, you could sense the Australian relief at 92/6, with perhaps even the most ardent Sri Lankan fan feeling that Geelong's inaugural international match might be a lost cause for their team.

The required-rate was now well over 10, and spinning all-rounder Seekkuge Prasanna wasn't showing any signs of dominance with bat in hand. He top-edged Faulkner to Travis Head, who snapped up a nervy chance at the start of the 16th over to fall for just seven.

But Gunaratne finally found a willing ally in the form of Kulesekara, who struck a couple of fours in his vital 12 from eight balls. The pair added a frenetic and scarcely believable 41 before Kulasekara fell trying to strike Tye for a six off the first ball of the final over.

This however handed Gunaratne the strike, as he smashed a four and a six to leave Sri Lanka now needing just four to win from three balls. He was unable to get more than a single off the next delivery, and when Malinga repeated the dose Sri Lanka needed two off the final ball of the match, which was duly struck down the ground for an emphatic boundary to seal a stunning win.