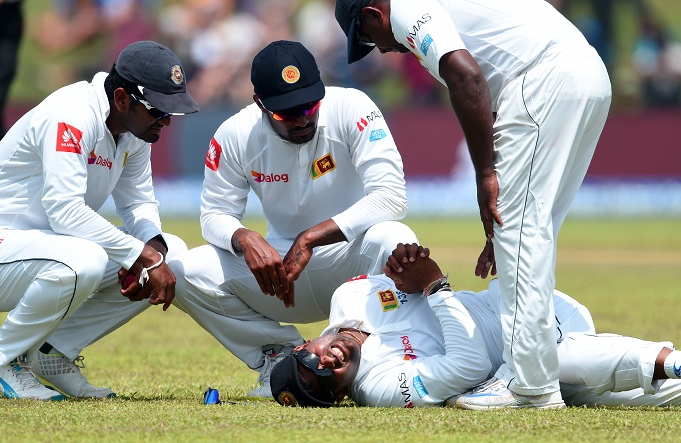 Another setback for Sri Lanka who are already without their recently-appointed Test captain. © AFP

Asela Gunaratne is set to miss weeks of cricket after he sustained a thumb fracture in his left hand during the first day's play of the first Test between India and Sri Lanka in Galle.

The Sri Lankan all-rounder was earlier sent to Colombo from Galle and will reportedly undergo surgery shortly.

Cricket Manager Asanka Gurusinha believes Gunaratne could "miss a minimum of four weeks" but has said the injury may require longer to heal.

"We will know in the next 48 hours what the exact time frame is," Gurusinha was quoted as saying by ESPNcricinfo.

"Just below his thumb there are about three pieces of bone. It is pretty serious. As soon as we saw the x-ray, we realised it was serious, so we sent him to Colombo. We got a call around 3:30 or 4pm today to say that the surgeons have seen him and they are operating on him tonight."

Gunaratne was injured after dropping Shikhar Dhawan at second slip off the bowling of Lahiru Kumara in the 14th over.

The Indian opening batsman had scored 31 runs when Gunaratne grassed the catch and he eventually went on to score his fifth Test ton.

Sri Lanka's recently-appointed Test skipper Dinesh Chandimal was earlier ruled out of the Test with pneumonia, and now with Gunaratne also missing from the home team's batting order, they are no doubt hampered.

It is unclear if Gunaratne will recover in time for the remaining two matches of the ongoing Test series.

India are in Sri Lanka for a three-match Test series, five ODI matches and one T20I